“Growing Old Is Mandatory Growing Up Is Optional.”

Today is my birthday.

My thirties have yet to come with the anxiety, doubt and depression promised to me by sitcoms and TV movies.  My biological clock is not thudding in my ears (but that could be because I DO have kids, I just didn’t birth them.)

I have never had a problem growing old.  This could be for several reasons:

1) Since I was sixteen people have assumed I was in my mid-twenties.

If guessing, people have always added almost a decade to my age.  By the time I was in my early twenties people would put me at past thirty without hesitation.  When I revealed I was twenty-four they would bumble over excuses for such a grievous social infraction.

It never really bothered me too much and I enjoyed watching people squirm and backpedal.  I would have thought my youthful good looks would have made people hesitate at the thirty mark, but alas.

People who met me though work justified their miscalculation by pointing out my position was usually not held by young people and certainly not young women.

Ok, fine. A pass for you. Running a large kitchen staff in Spanish at twenty-four is a bit abnormal.

2) Considering I was never the beneficiary of these youthful accreditations I am not entirely sure what services they provide.  Thus I do not miss them- now that I am indeed over thirty.

3) My Oma is without a doubt one of the wisest and most sensible person I have ever met.  When her daughter (my aunt) was about my age she asked her mother, “if you could go back and be any age, what age would it be?”  Oma thought about this carefully, in her meticulous German way, and responded with confidence:

One could attribute this assertion to the fact that my Oma’s own youth was rudely interrupted by Hitler and WWII.  She was born raised in Berlin.  After the war she left her country alone to start over in the US.  When I asked if it was these early trials that made her mid-life more appealing, she veimatly denied it.

She said that it was not the events going on in her life that brought this happy calmness (while relenting that war and devastation were an inconvenience to the process.)  But it was the way she was able to react to the events in her life that resulted in her blissful content.

Self-knowledge gave her perspective.  A mountain of experiences offered her a vantage point that was inaccessible from her youth.  I am on the way up my own mountain.  If you have ever hiked up a mountian you know the halfway up feeling.

When you get that first glimpse of the summit’s promise it gives you that extra push.

Even though the path seems to climb forever there will be a top and with it will be aching legs and short breath but also- there will also be this. 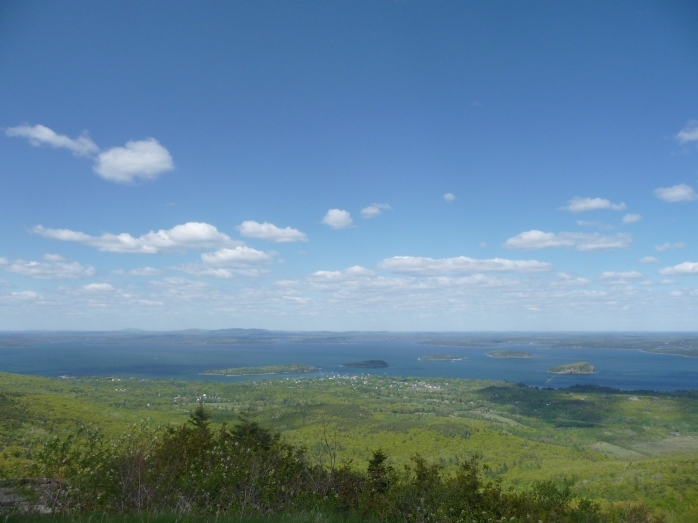 A grand view of where you came from and all the possibilities of where you could go from there.  I have a few years yet to go before that magical age but I can feel a bit of the benefits.

I am happy in my state, though the random patches of darkening skin on my face bother me, I love my emerging crows feet.  I have earned them over the course of a million smiles and I plan on shoring them up with a million more.

I am glad to have been where I was and excited to see where the future leads me.   Being so far from family and friends has rendered my recent birthdays more or less private affairs.  Often only acknowledged by those who really care and that is fine by me.

I will mark this occasion with a gift to myself.  A secret joke that no one else would really get.  I have been granted the allowances of this age for some time now by others and now I get to experience them in ernest for myself.

Birthdays are funny things that range in the effect they have on a person throughout their life.  I am more sure with each passing year that I will welcome all my birthdays to come, I am grateful to have years to loose track of.

Mostly I am happy for the view.  Even if I have some travel left before the summit (according to Oma) it is a blessed thing to have more time on this earth.  Time that will hopefully help me to make better sense of myself and this crazy world I live in.

I will not deny a single second of my path till this point and I can only hope for more birthdays with my family in the future.  Maybe even birthdays where we are all in the same room.

I might even have a party for such an gathering, we will call it a “getting old party” or “older day party.”  As a wise-man told me recently “your birthday is the day you are born.  The rest are just the day you get a year older.”  We will have it and perhaps some pie (I don’t like cake.)

I will be elated to attend.

Owning all my years and hopeful for more, surrounded by love and family.

Shoot!  If I get that I don’t really even need the pie.  Though, I would really like some anyway.

One Comment on ““Growing Old Is Mandatory Growing Up Is Optional.””