Sorry, I can’t keep all of them in, all the time.

After a late night binge of The Hobbit and Lord of The Rings I woke up and REALLY REALY wanted a felt hat.  A wizard hat!  I found some wool roving online and ordered it as if clicking quickly would ship it faster.

I grew impatient (you are shocked I know) in the meantime and scoured the county’s craft stores for wool of any type.  It proved difficult but it gave me time to research how exactly one turns wool into felt.

I was basing most of my felt-making theory off a vivd argument I had at the Renaissance Faire when I was eight.  I was making a felt ball at one of the artisan booths and talking with felt maker while he made a hat over his knee.

My family religiously attended the “Renn Faire” every year since I was a baby and I was well accustom to its proclivities.

Anyone who has ever been to the Northern California Renaissance Faire can tell you that the queen’s procession is something of a spectacle.

As always, I had questions- so I figured someone who worked at the faire should have some inside info I queried the felt maker;

Me:  “Is that the REAL Queen of England?”

Renn Faire Dude:  ” Of course she is the Queen.  LONG LIVE THE QUEEN!” (This phrase is always shouted.)

Me:  “No. I mean in real life.  Not at the Faire is that the Queen of England?  This is NOT my first Faire!   I know it’s mostly an act- so is that, or is that not the real Queen of England- who is alive today”

Renn Faire Dude:  “Of course she is! LONG LIVE THE QUEEN!”

Me:  ” So she comes over from england and works at the Renn Faire?!”

Renn Faire Dude:  “What do you mean comes over from England?”

This went on for a while both of us working on our projects and discussing the finer points of Renn reality.  In between my annoyance with his dodgy answers- I grew fascinated at how he manipulated the fiber, wetting and scrubbing the wool.  Shapeing and stretching it over his knee.  Making a pile of sheep transform into a really cool hat!

In order to further my knowledge on the subject I “consulted the oracle” (The phrase my family uses when you look something up online) and found out that there are many different types of felting; wet felting, needle felting and carroting.  Apparently Carroting involves mercury so I ruled that one out.

As much as I love to stab things with needles the fond memory of wet felting made me want to give it a chance.  Since all types of felting rely on intertwining the fablers of the wool into a mesh I started by laying out a layer of red roving from top to bottom over a silk (or other non fibrous fabric you have, nylon works too.)

I put the colors I wanted on the inside down first then laid fibers out over them perpendicularly for the next layer in the same color.  Then I moved on to the next color layer again from top to bottom (3rd layer.)

Then another layer (4th not shown) again alternating directions for the 5th and final layer.

Now it was time for the warm water and soap, to hold everything down I used scraps of screens we had sitting around, I stretched across- back and forth.

I sponged hot water and soap all over to saturate the fibers and allowed me to agitate them. 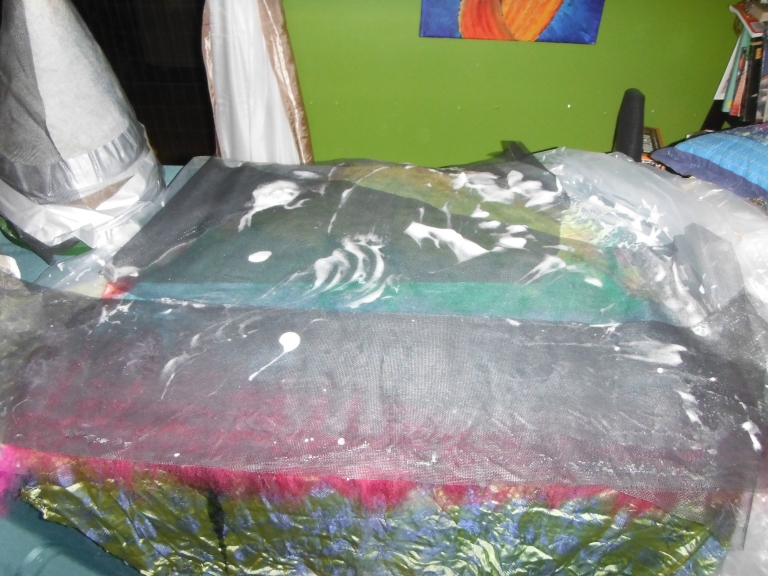 And by agitate I mean squish the wool around with your fingers in warm sudsy water, it is kind of fun.  You have to do it a lot to get the fibers to intertwine so just go to town!  When you are done (it will take longer than you think don’t rush) you and think about molding your felt.

You can check if you are reedy to mold by pinching and pulling on the sides, if it pulls together good.  If the bit you pull on comes out, keep going.

After making the fibers into a mat, of sorts, I laid it out on a cone frame and rolled the edges under.  I soaped it up again and tried to get the back edge to seal.

I washed out the soap and let it dry overnight hoping the fibers would set up as one, I had no such luck.  I took some strong thread the sewed the two sides together so it would be one strong piece for the shrinking process. 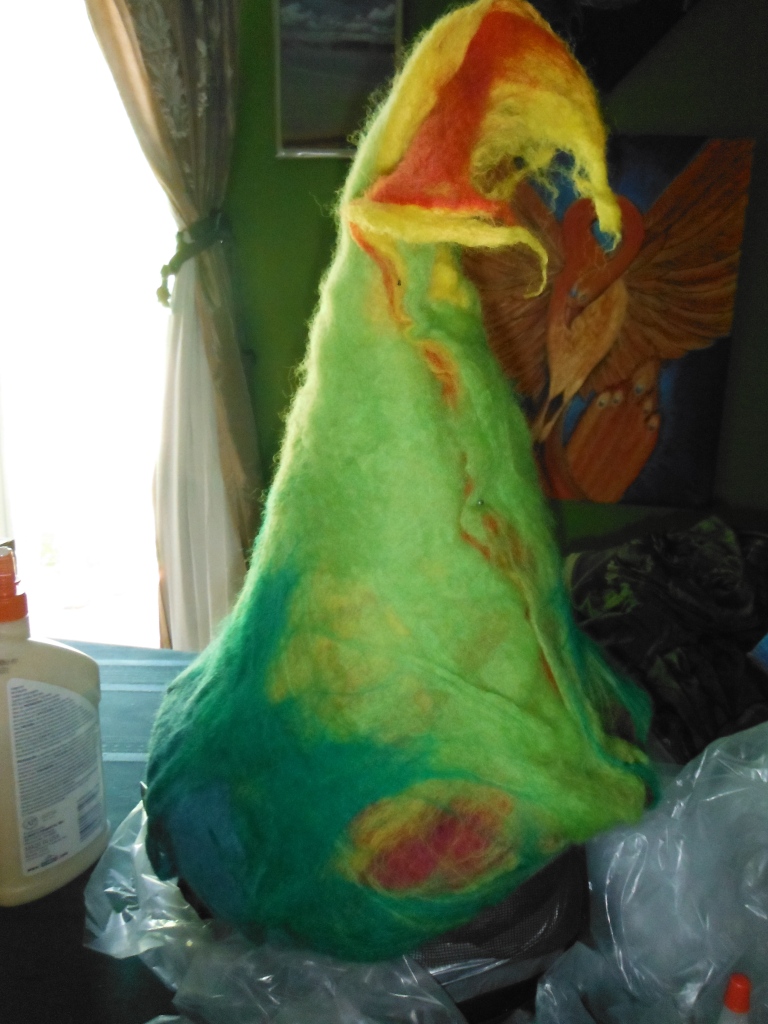 I folded it over too, since I fully intend to wear this out in public and I don’t want my family to be modified to be seen with me. 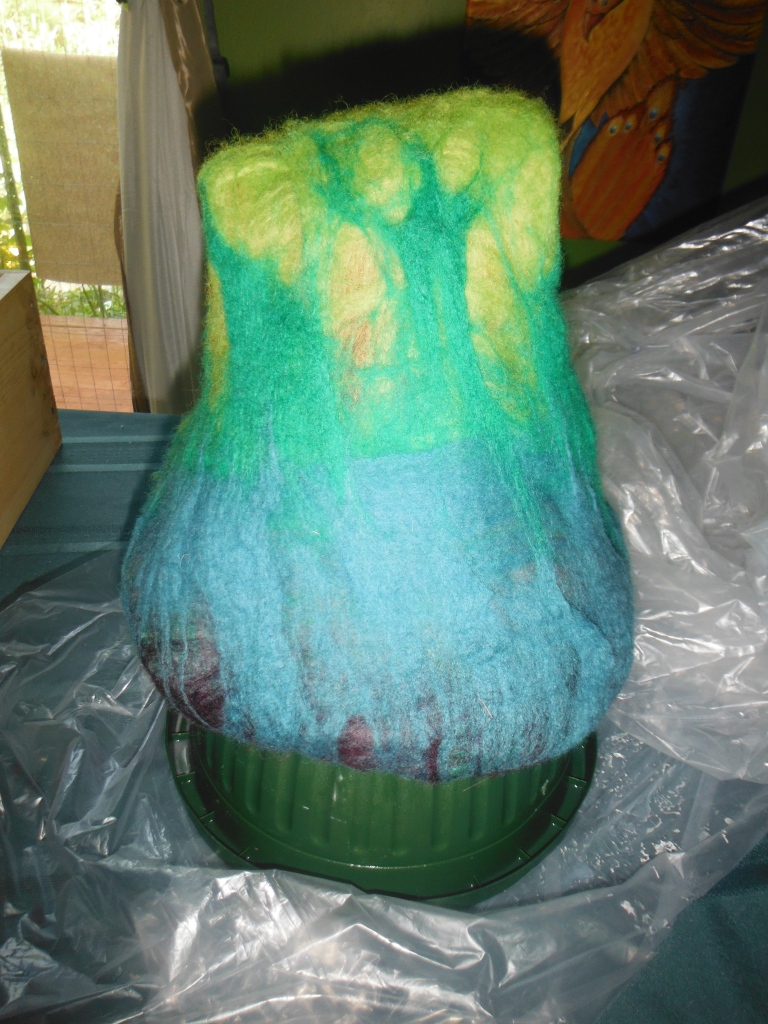 gave it a little twist. 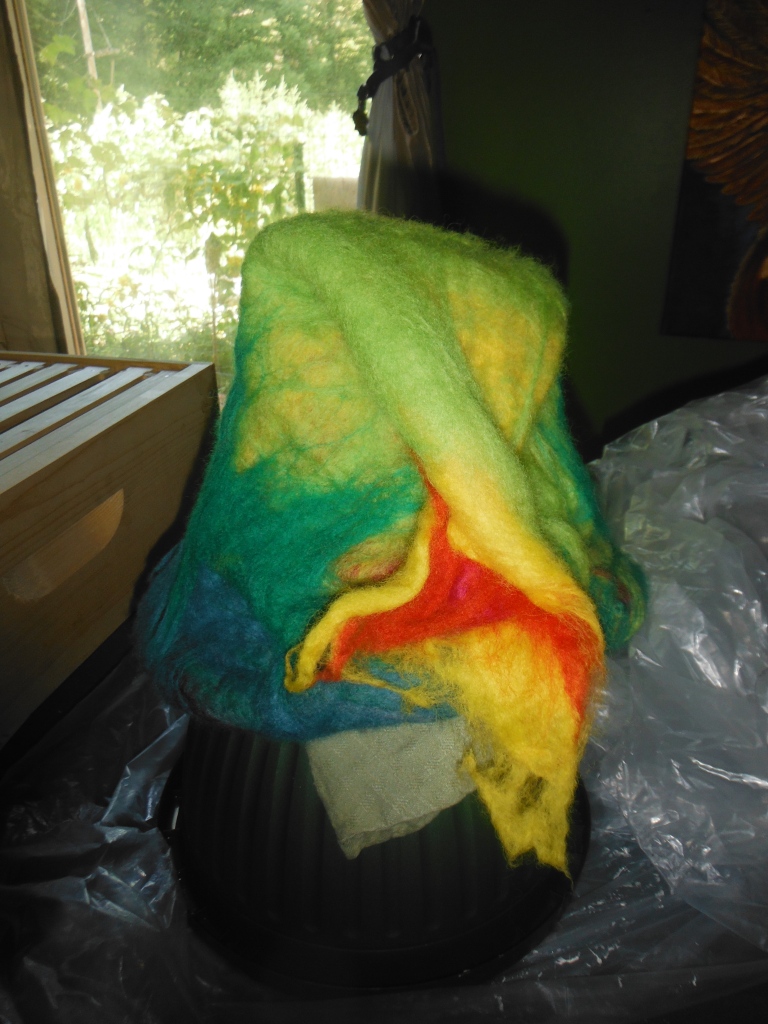 Then I rinsed and dried it in the dryer- checking on it constantly to monitor the shrinkage.  In the end I wound up with this- I like it. 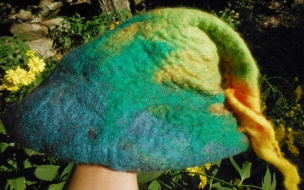 I intend to wear it frequently as the season change.

Family beware! You will have to be seen with me and my creation 🙂