“That Man Is The Richest Whose Pleasures Are The Cheapest.”-H.D.T

I got an unexpected surprise soon after I married my husband.  We had no money for a honeymoon (this was not the surprise.)  As we were discussing what we could do with our time off together I jokingly suggested that we go driving around Maine listening to Stephen King audiobooks.

To my absolute shock he got really excited and exclaimed “That’s perfect!”

For our Honeymoon week, we would day trip up North have lunch (at the time we were doing a lot of “BBQ research”) and getting to know all the back roads and highways that wind through Western Maine and Eastern New Hampshire.  Living so close to the White Mountains offers us a wonderful opportunity to explore the forests, lakes and National parks that surround.

This week, we found ourselves with a couple of unexpected days off and decided to download some stories, load up the dogs and take off.  Though the older two are pros at car rides and national parks– it would be Isis’s first time.  I’m not going to lie I was a little nervous.

We both prefer paper maps to GPS and plotted a route based on roads we had not been down before.

We especially like the roads with signs that say “Warning: Road not maintained in the winter 1 mile ahead.”   That’s where the keep the good stuff! 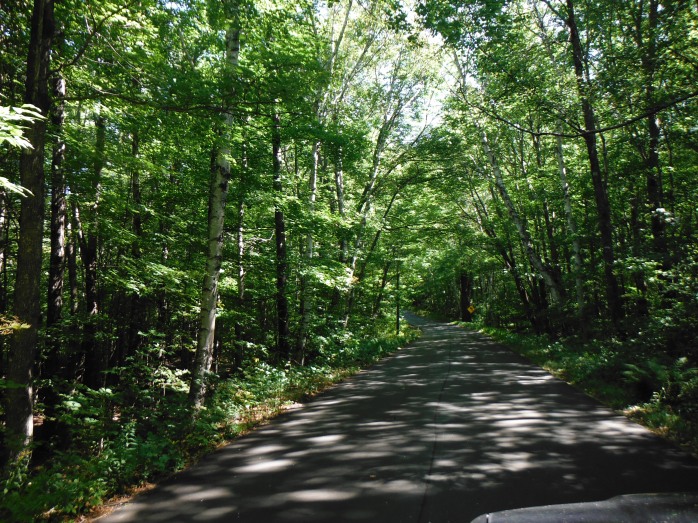 We passed hundreds of lakes. 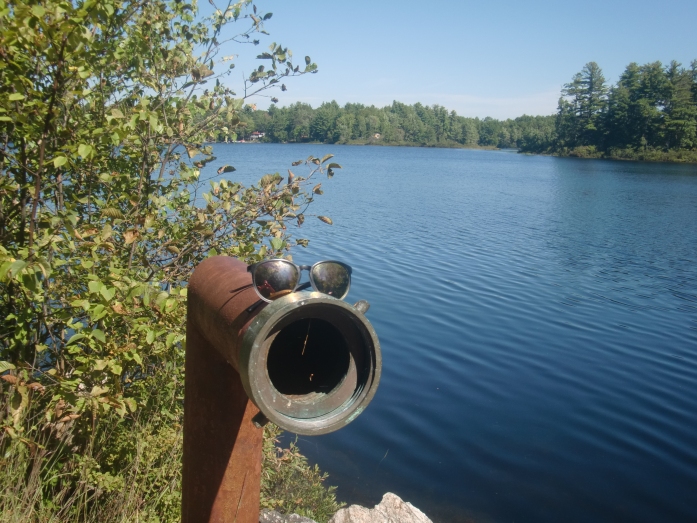 Lots of wide open farm land that reminded me of all our trips up to the Sierras in Ca, when you are crossing the middle of the state. 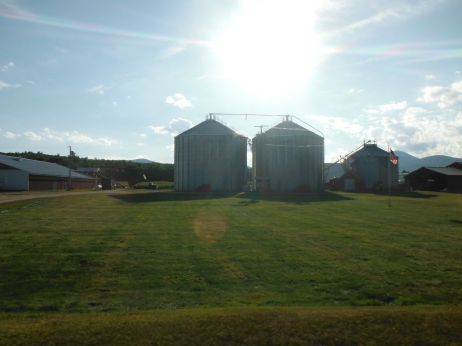 As we wound into the mountains, the maples and oaks gaveway to cedars and pines.  Right after-

We found a spot on the Androscoggin river to let the dogs out.

Here- Isis broke the leash and went running off into the woods.  My heart jumped into my mouth as I chased after her.  She was gone in seconds, then back in half a minute and back on a different leash.

I NEVER WANT TO DO THAT AGAIN!

Even more astounding than her quick return is the way she takes to water.  Honey and Pele are good at river walking but don’t like to out and out swim.

Isis didn’t want to get out.

Unless it was to shake.

Then immediately go back in.

I suppose if I had to wear the coat she does I would be in the water all the time I could too.  We found a ton of cool rocks like this one with the quartz ring. 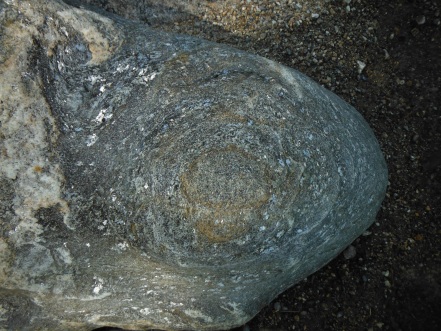 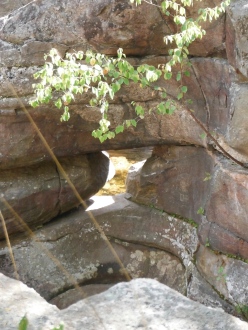 Upon our return to the car we realized that a wet Isis was the gift that would keep on giving.  It’s like having a 10lb bag of wet wool in the back seat.  She didn’t seem to mind but you can see the look on the other faces.

We had seen a spot on the map called “Step Falls” and decided to do some recognizance.  After a short hike we were all rewarded with hundreds of feet of smooth sun baked rock with natural water slides ending into pocket pools. 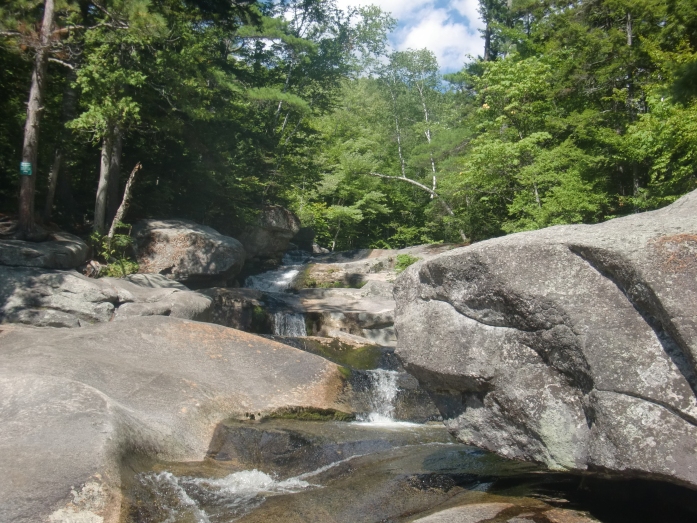 Some of the pools were only six feet across but eight feet deep.

Anyway you cut it, this was beautiful! 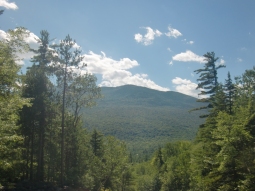 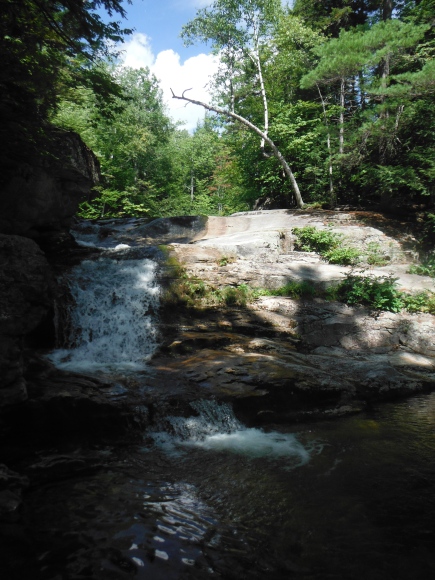 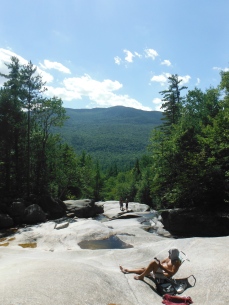 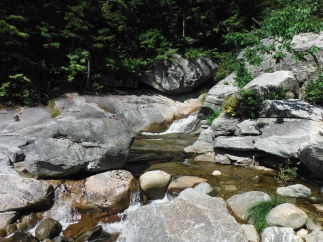 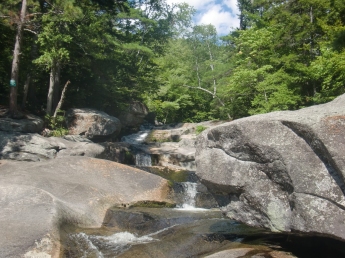 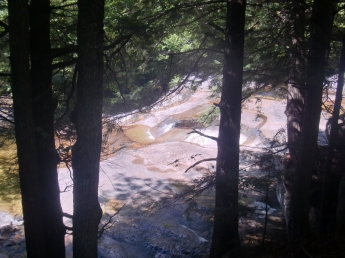 Isis did some more swimming and the other girls followed the Ry around while he prospected.

I was worried a couple of times that the dogs might fall over one of the spillways but in the end it was me who ended up on my butt.  I did not go over the falls and managed to hold on to both leashes in the process. But a wet butt, is a wet butt- all the same.

Isis did pretty good after that first little glitch. 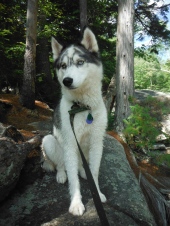 We stopped at one more falls before heading back.

I would consider this one a proper falls.

There was a small waterfall up the river too. 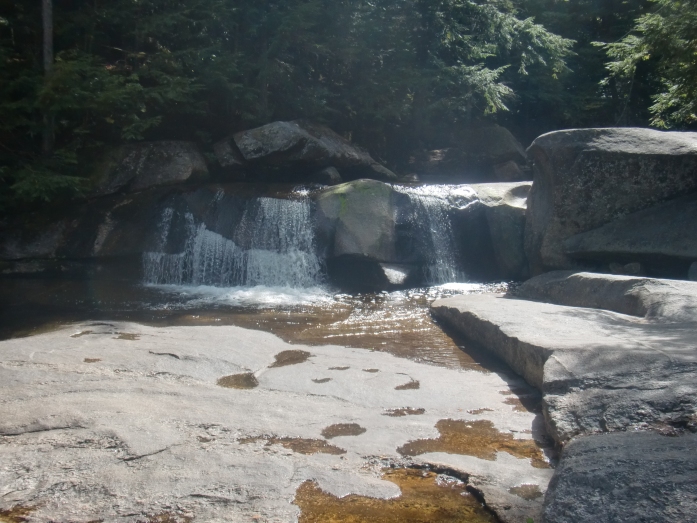 I should mention at this point (and because he has just informed me he expects full photo credits for his pictures) that Ry had a camera too.  This is me telling him the picture will be backlit and that he should go to the other side.

He said that he was using the lighting to “highlight my angelic nature” and I flipped him the bird (not pictured.)

It was an epic trip.  There was randomness. 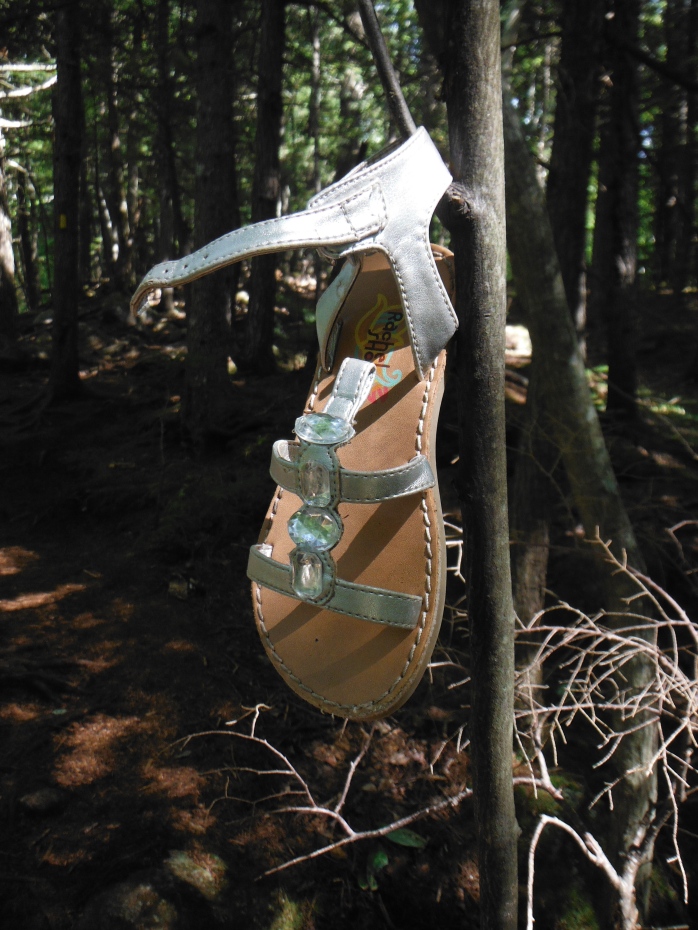 Great food on the roadside. 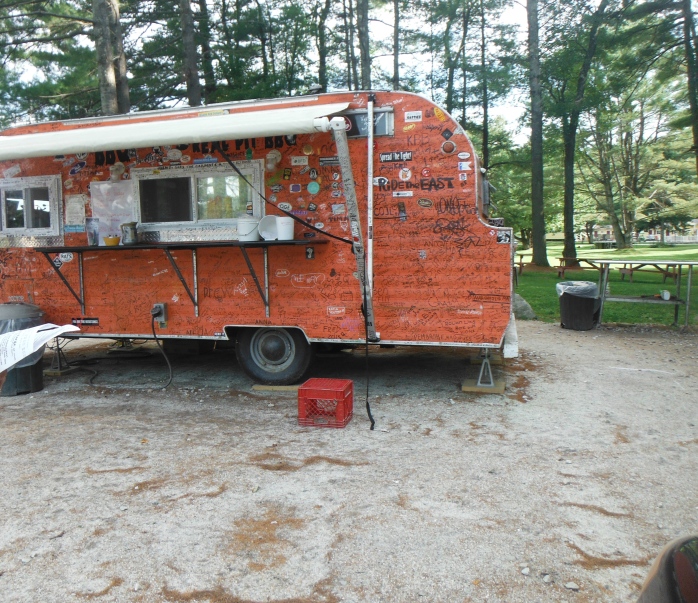 It was a great way to spend the day.

There is a line from a Stephen King book (I forget which)  where one of the characters ( a Mainer) says something like- “warm fall days are our reward for putting up with the tourists all summer.”  I think I know exactly what he meant.

So do they.  My car will never smell the same.

2 Comments on ““That Man Is The Richest Whose Pleasures Are The Cheapest.”-H.D.T”