“Once In A Blue Moon” 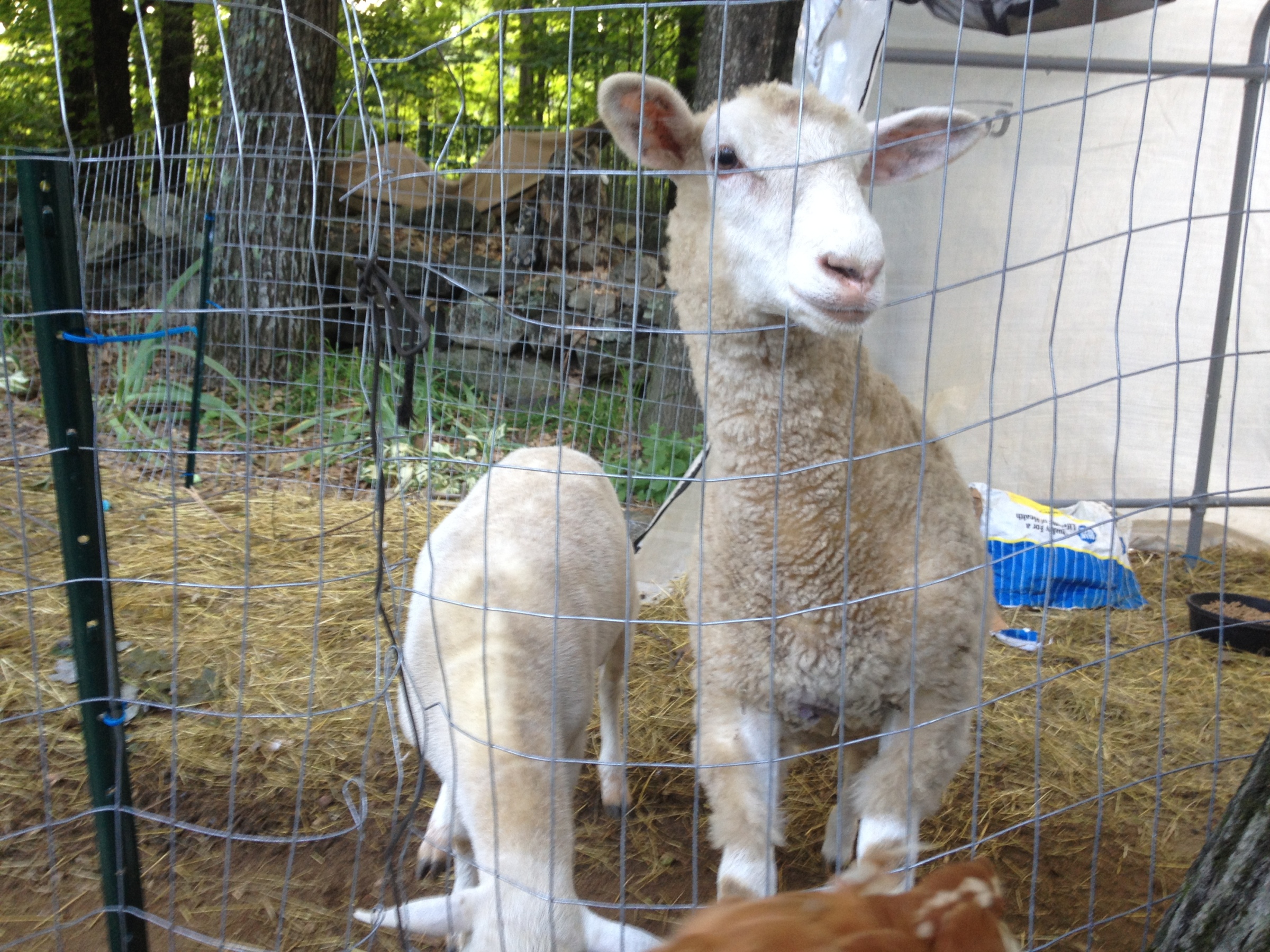 It feels apt that July began with a full moon and will end with one too.

The first moon can be called a ‘Blessing Moon’ (an old term for July’s full moon) the one on the 31st of July, will be the second full moon this month and thus- a  ‘Blue Moon.’

The time in-between has passed so quickly and with such velocity, it has made my neck sore.  Though, it is more likely the discomfort comes from all the physical labor over the recent months.

Life is always shifting, changing, growing; becoming what is next.  Watching that growth is awesome, if you can take the time to be aware of it. I have lacked this awareness for some time now and for me, this second moon feels like a reminder that I need to do better.

There is often so much going on around me that, in middle of that whirlwind it feels like there is no change.  The spot between my (our) feet looks the same as it ever did.

Maybe time to ‘rinse and repeat’

But when I poke out through all the whurrling chaos I see to my amazement that this: 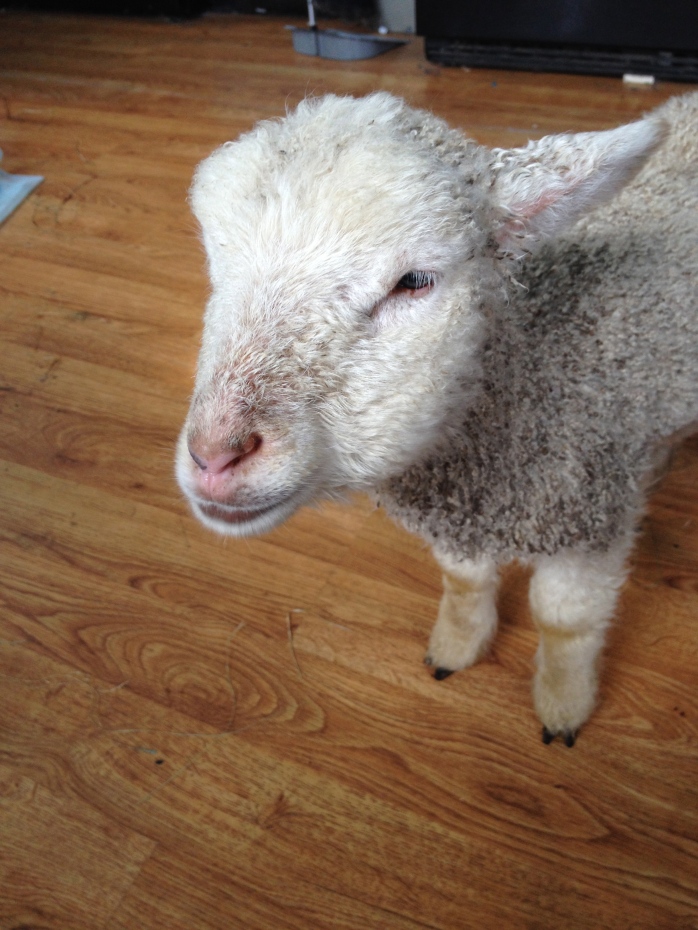 It is not as if we were absent for the interval in-between.   To the contrary, we were acutely aware of every little piece.  Literally shepherding their journey.  (Except the few times when they have gotten out while we were gone, lord only knows what kind of shindig went down then.)

I have been so focused on the future; that I have done my present and the beings around me, a great disservice.  In my impatience for harvest (again, who knows why) often all I see is how far the garden has to go. 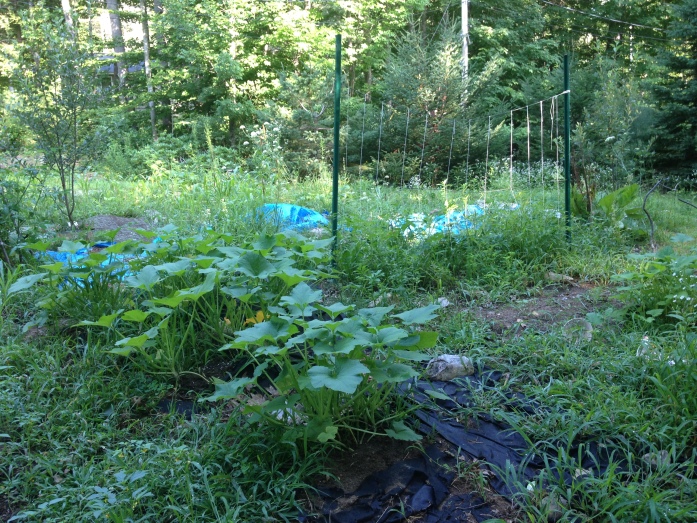 Instead of giving it credit for having accomplished quite a bit; since three weeks ago it looked much different. 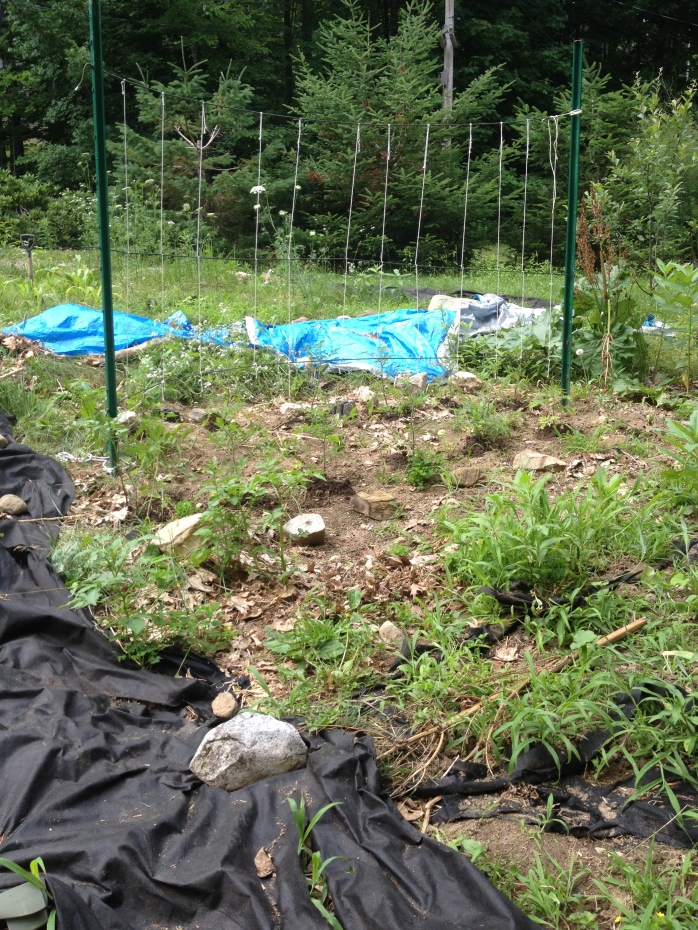 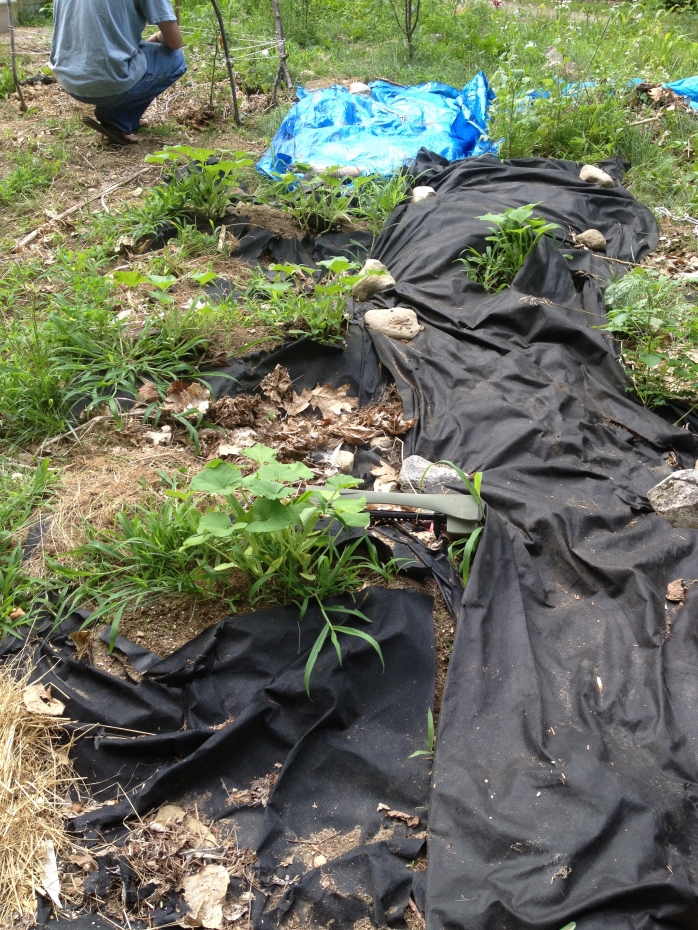 Some “then” and “nows.” You are smart and can figure which is which. 🙂 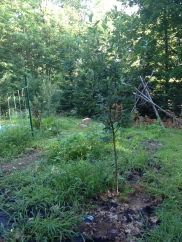 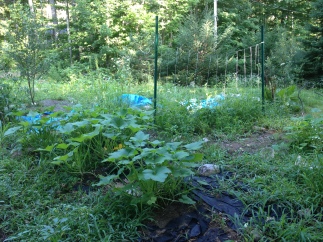 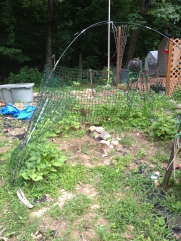 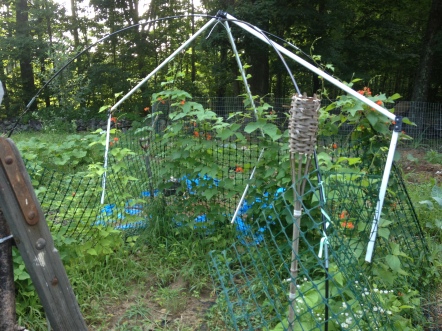 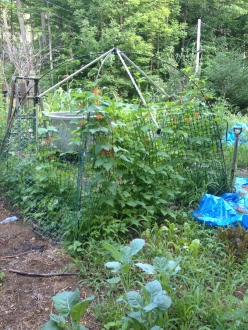 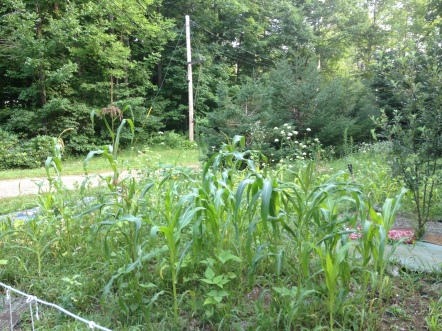 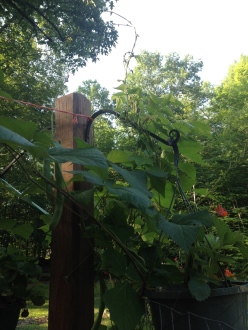 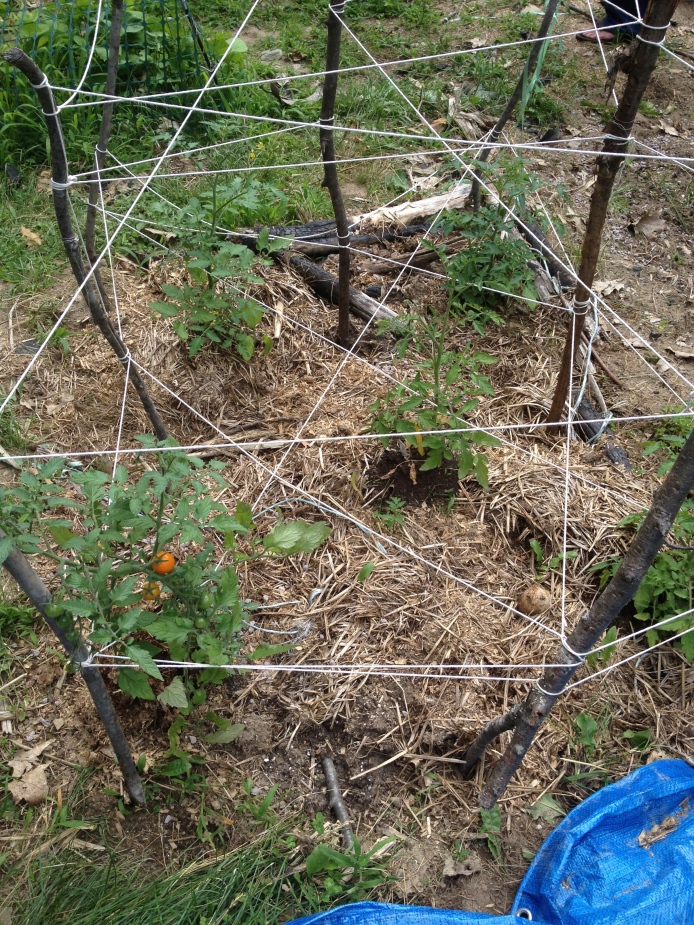 There have been so many big changes– I have missed the little ones.

We have been through a lot.  Some days have been bloody and dramatic requiring a huge shift of balance and a new view of the future for this homestead.

Thanks to another killing spree by the husky a few months back; we are down to ONE guiana fowl who has been dubbed “Fredrick.”

Mind you, we were not absent for this event.  Rather, I was chasing her the whole time- out of reach by less than a foot for each. kill. she. made.

Which I vote; is worse.

She was faster than them (and even with a turn, bite and grab) she was too fast for me.

Two of them died in may arms.  All that before we went to work… 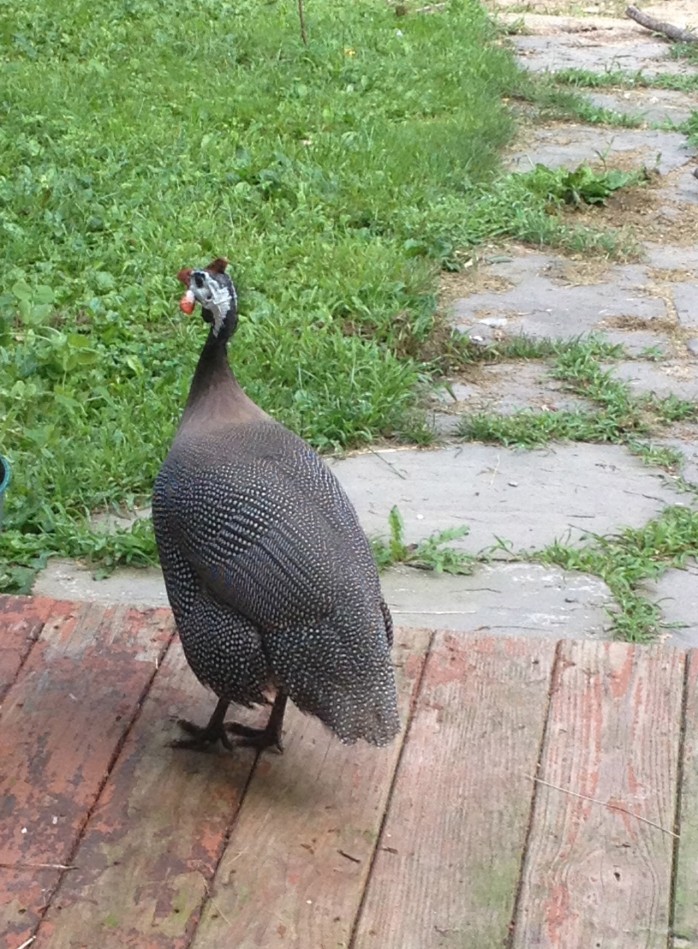 Now he hangs out by the car and anything reflective- looking for his flock.   He seems to prefer the company of the sheep over the other feathered homestead inhabitants.  I have tried a dozen times to put him in with the chickens and he wants none of it.

So we made him a place, by the front deck, in the hostas with a mirror and his favorite shinny cylindrical flock mate. 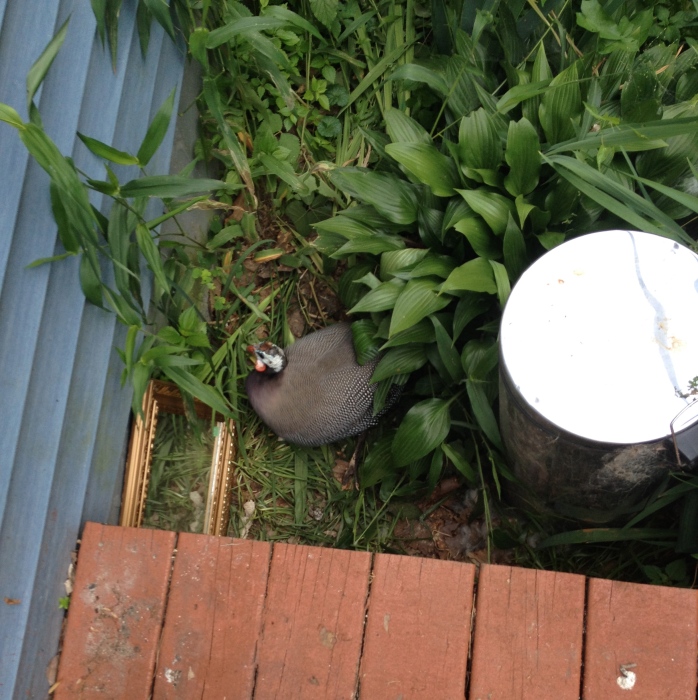 If you walk up quietly you can hear him in there “wheep, wheep“ing to his reflection.   I am not going to lie, it is a little sad.

In my experience life is a constant rebalancing act and there are many days when even your best is not good enough.

Life goes on and new things appear that you never saw coming.

For example; our cross-the-street neighbor has gotten a bunch of chickens (cool beans!) and there seems to be a small faction of these pullets that have decided to cross the road and live in the garden/sheep pen.

I’m not kidding.  Not only do they come over here but they put themselves inside the sheep pen.  They eat the sheep feed and then hang out. 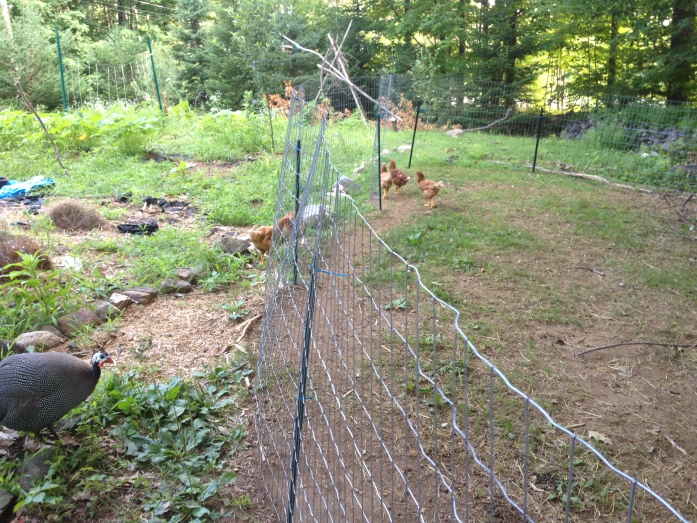 We have been throwing them out of there 2-3 time a day for the past 2 weeks.  Many times we have brought them back to their home pen and then an hour later. 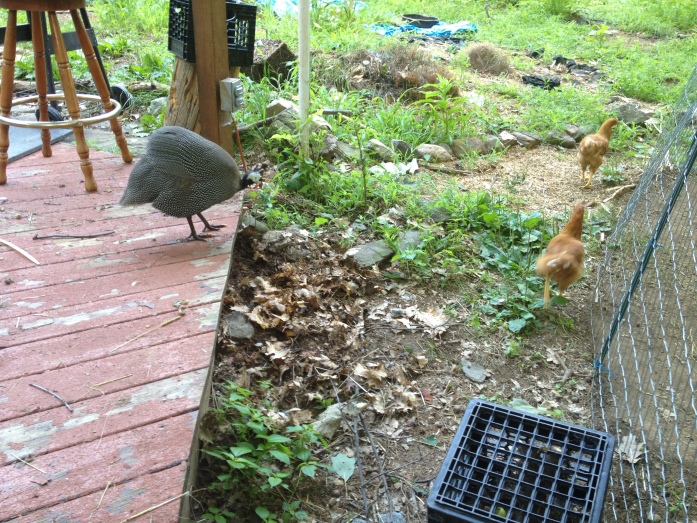 We are not really sure what to do about them at this point.

The sheep herd them out sometimes but most of the day- could care less.  Sheep are rather aloof.

Unless it is green and yummy; they just don’t care. 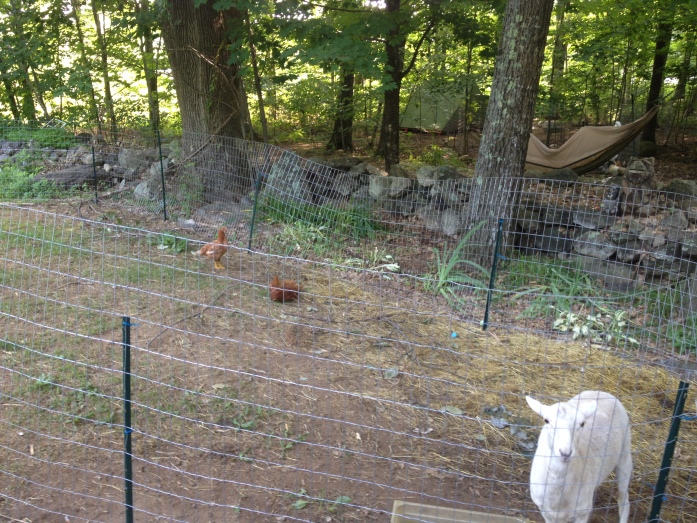 Oh and getting scratched and loved, they do seem to care about that. 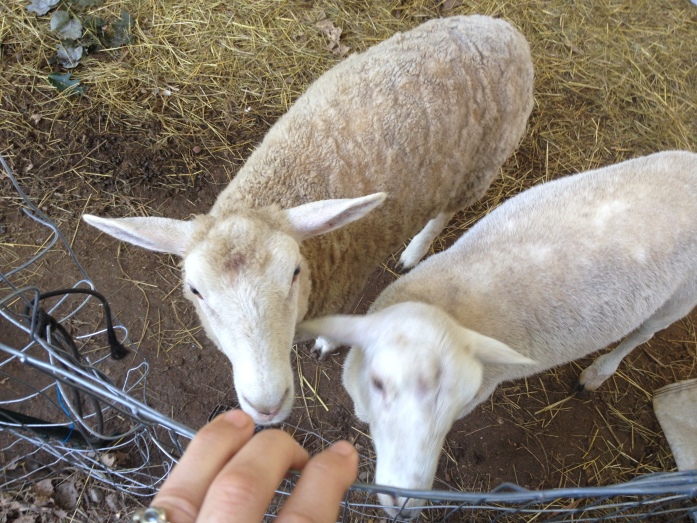 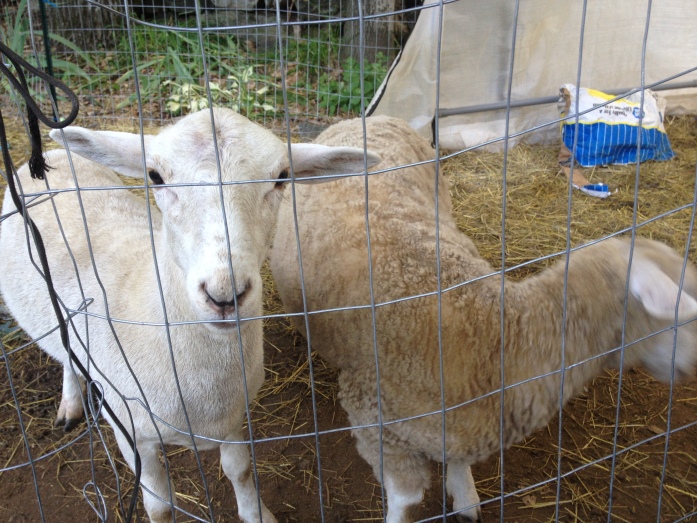 The Neighbor Chickens are now quite nice and used to us handling them. 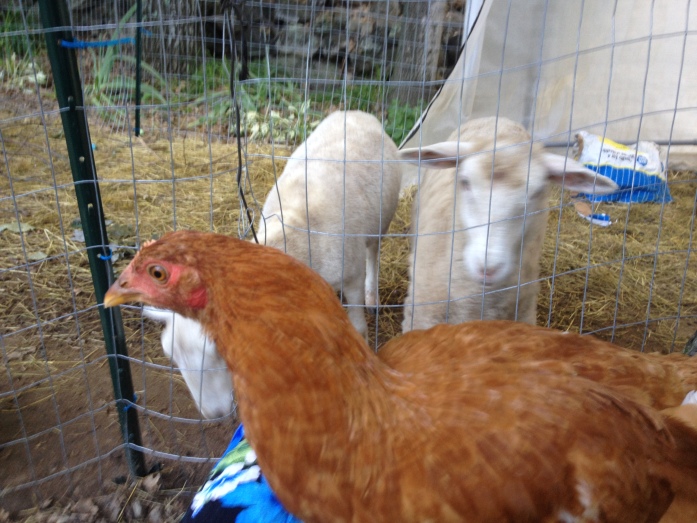 It makes Lulu wonder what ‘I see in them’ and question why she is not allowed on my lap any more. (A: It is because she weighs like 80 lbs.) 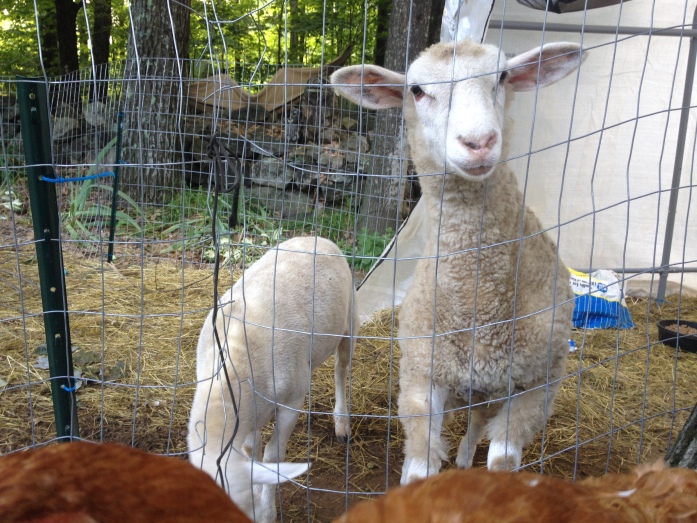 The ducklings are now ducks.

They are the fastest growing fowl I have ever witnessed.  They go from down- to feathers in a month and gain almost their full size with the plumage. 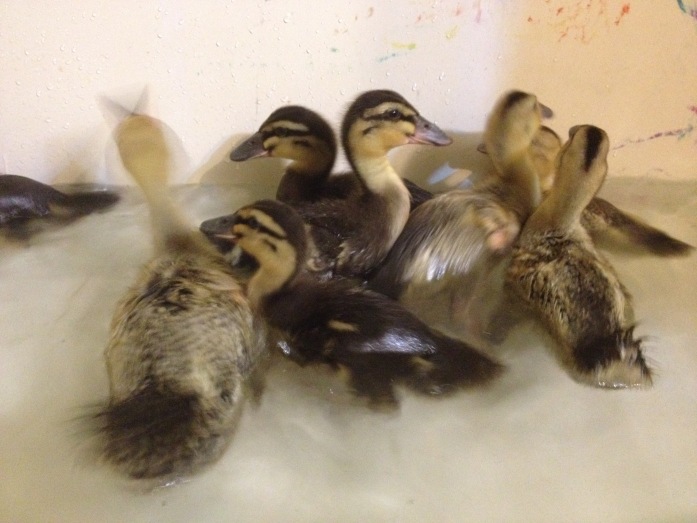 They do not fit in the bath tub anymore. 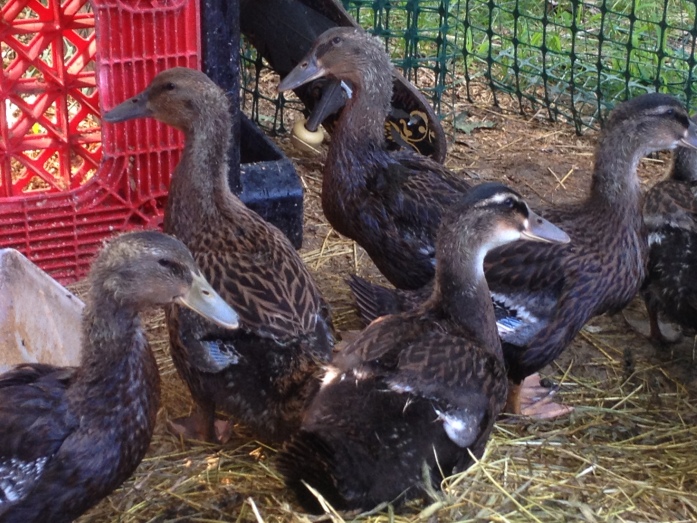 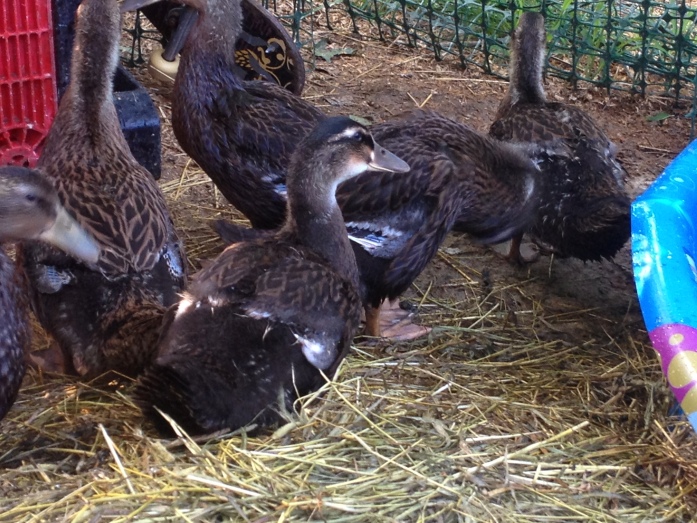 And almost don’t fit in a kiddie pool.  It really is a trip.

Everyday, we open the door it feels like they were switched in the night with other ducks.

It turns out that ducks are also the stinkiest birds we have kept yet and smell like sour oatmeal.  Did.  Not.  Know.  That.

I guess my ‘Blue Moon’ realization this month is; that we have been in survival mode for so long it feels normal.  Normal to be under that amount of  stress, worry and responsibility, even though it is complealty out of whack.

But that is no excuse for a poor attitude.

I have lost my fool mind and I need to get it back.

That, my friends is where I find myself now.  Surrounded by love and life with enough light to see it all.  Even if only for a brief instant, before the shadows deepen and we move forward.

It is time to focus on  the things that matter; hope, love, kindness and my continued efforts in learning patients with the people and things I share my space with but mostly, myself.

It would appear that I have chosen to travel at night.  I have to feel my way along the edge of the path to tell what direction to go.  I can’t see it.  Without the constant light of day I cannot plan my life by what I see ahead, only what I feel now.  This might be why most people travel during the day but I find  for all the stumbling us foolish night-walkers do, every once in a while there is a bright moon to light our way.

Even rarer than that, is that chance to recognize how fortunate we are to have the light.  You could say it only happenes “once in a blue moon.”

I hope that your life is filled with light, love and the awareness to see how epic that moment is.