My figurative ducks are all over the place!  However, I have found that actual ducks are easy to get in a row.  Step 1: Put down a line of food… that pretty much does the trick.

Fun fact: it works for chickens too.

It is a moving, quacking, squawking row; but a row none the less.  You may recall from my earlier posts, that this year we were “NOT going to get anymore animals.”  Instead, we wanted to focus on keeping the ones we have:

B)  Out of the garden.  Then, we might have a chance at a fall vegetable harvest.

The ducks had other ideas.

I made the decision to take the chicks from the broody-dragon-fowl, based on the ladies’ first attempt at duckling care.

We had a pretty good showing.  With all the eggs now gone (!) we have 11 new ducks.    For about two weeks, I didn’t sleep more that a couple hours at a time.  When they are first born they are so fragile.

I was constantly getting up the check the newborns in the other room or out to the nest to see if any new ones had hatched.  They defiantly seemed to favor night time.  It was weird;  or on purpose, and they are already trying to break me.

My life was a constant judgment of different levels of peeping.  Some mean- “I’m alive! Yeh!” Those ones are good.

Others are- “help me I’m F^@ked!!! i’m going to die very soon if no one gets me out of here!” those ones were the reason for my lack of sleep.

If they fall over or get trampled, sometimes they can’t get up.  Their neck mussels are very week in the first day and they could drown in a puddle.  The third and forth ducklings are named Lazarus One and Two because I was sure they were going to die every day for the first week of their lives.  If something happened it was one of the two of them at the bottom of the pile.  Now they are as strong as the rest of them.

Since these were naturally incubated the hatching rate was very staggered.  The oldest, Big Jim and the youngest, Itsy Bittsey Teeny Tiny Scar Face, had an impressive size difference for only being 12 days apart. 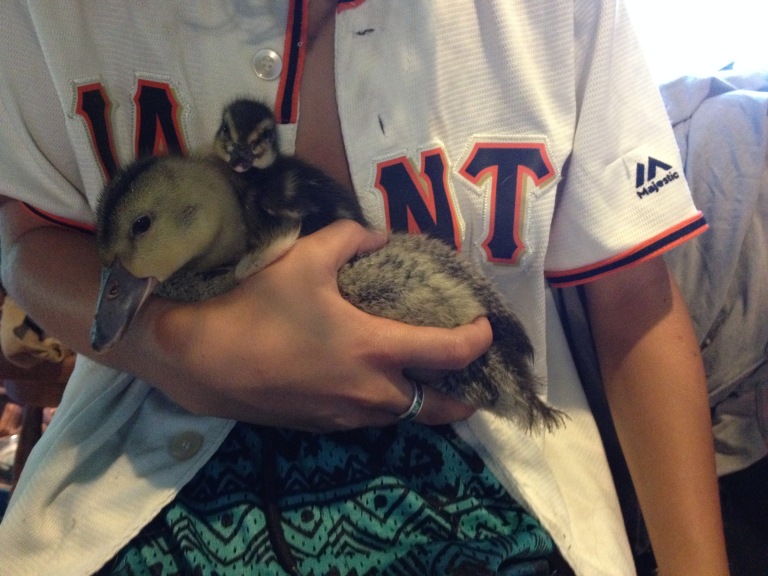 Here, Itsy is a whole day old and Jim is about 13 days.  Ducks grow REALLY fast!

They remain pretty stinking cute the whole time.  Those eyes! 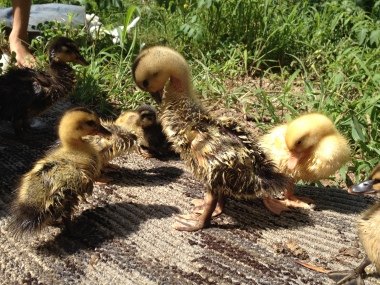 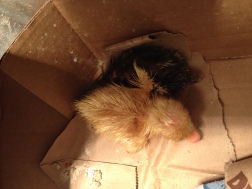 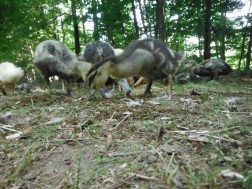 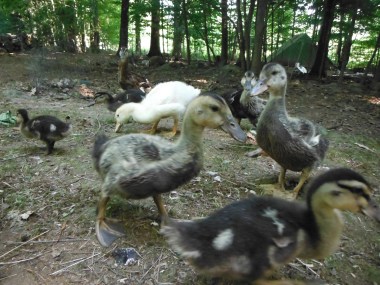 I have relocated them outside, but kept them separate from the older flock.  Unless I am there to supervise.

Sometimes the oldies will go after the little ones but mostly the wee folk stick together and I think that has been helping.  They are fast and move in packs AND outnumber them 2-1.

We are formulating a plan for winter.  This may include some culling the older flock and some roasted duck dinners.  It is interesting to watch the homestead take on a life of its own.  Kind of like jurassic park, but way less terrifying.

I am trying to spend as much time as I can cuddling ducklings that will soon be ducks or raptors, I forget.

I am sure it will be an adventure.

I will end with one of the things that made all the lack of sleep worth it.  A day old Itsy sleeping in my hand.  It is as fun as it looks!

5 thoughts on “Getting All Our Ducks in a Row”