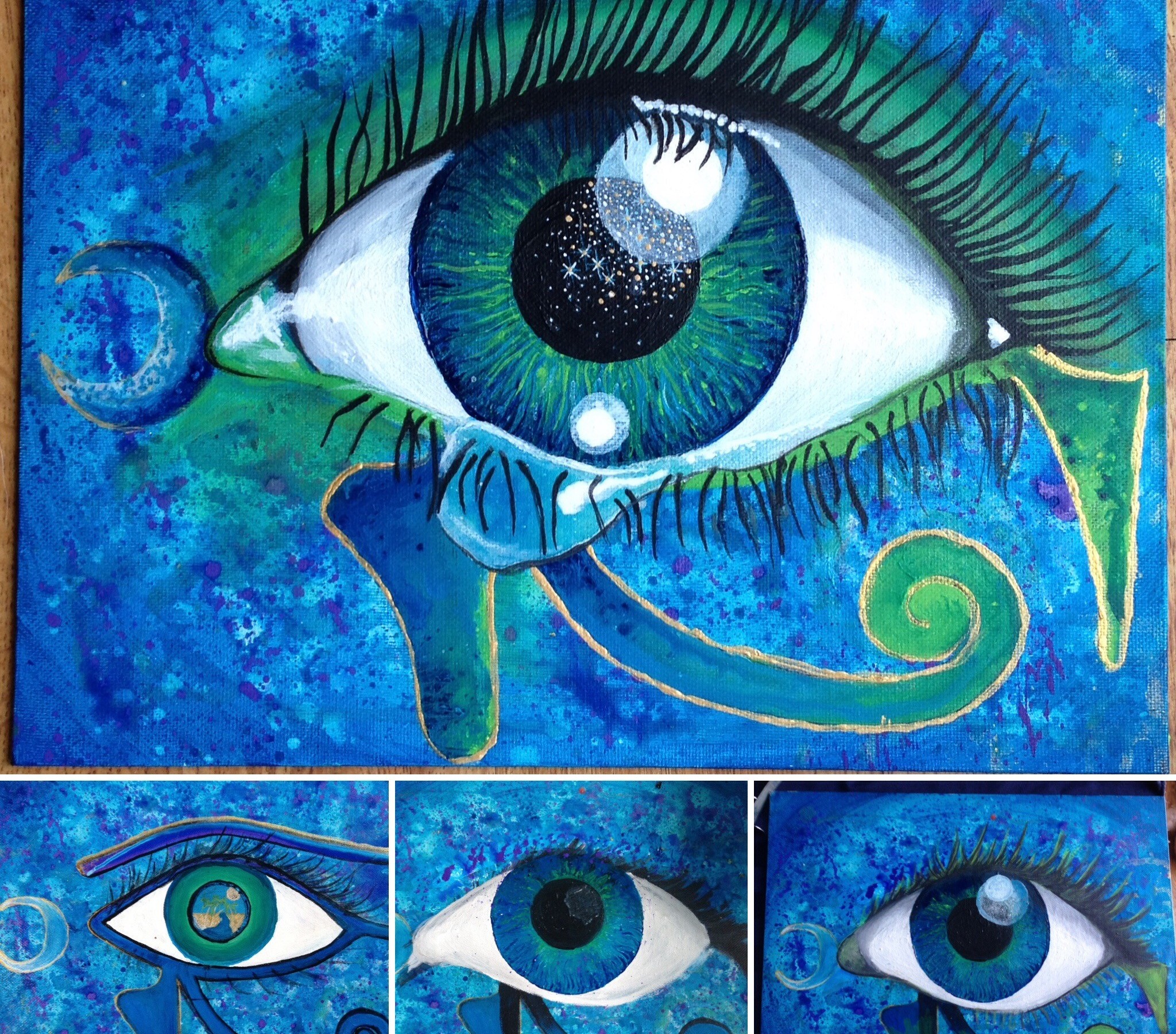 Many of my paintings or attempts at art, never reach final draft status as the stacks of unfinished watercolors on my bookshelves can attest to.  Awhile ago I painted The Eye of Horus on canvas with acrylics.  It was a rough draft as so many paintings are.  I put it on our mantle and it sat there literally staring at me for years.  I like working with acrylic paint because if I mess up I have chance to wait and try again.  Watercolors are much less forgiving.  I love the challenge of working in watercolor and ink. 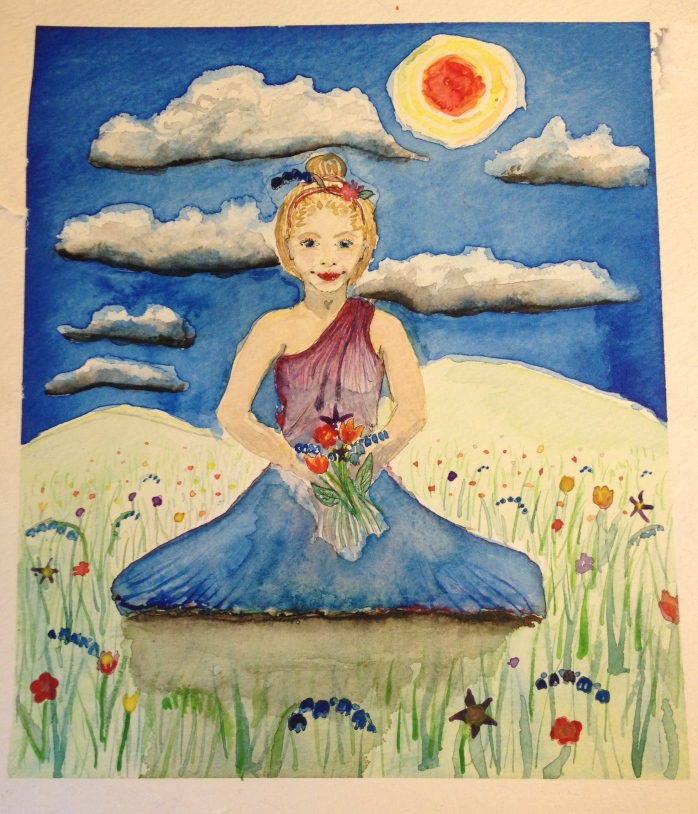 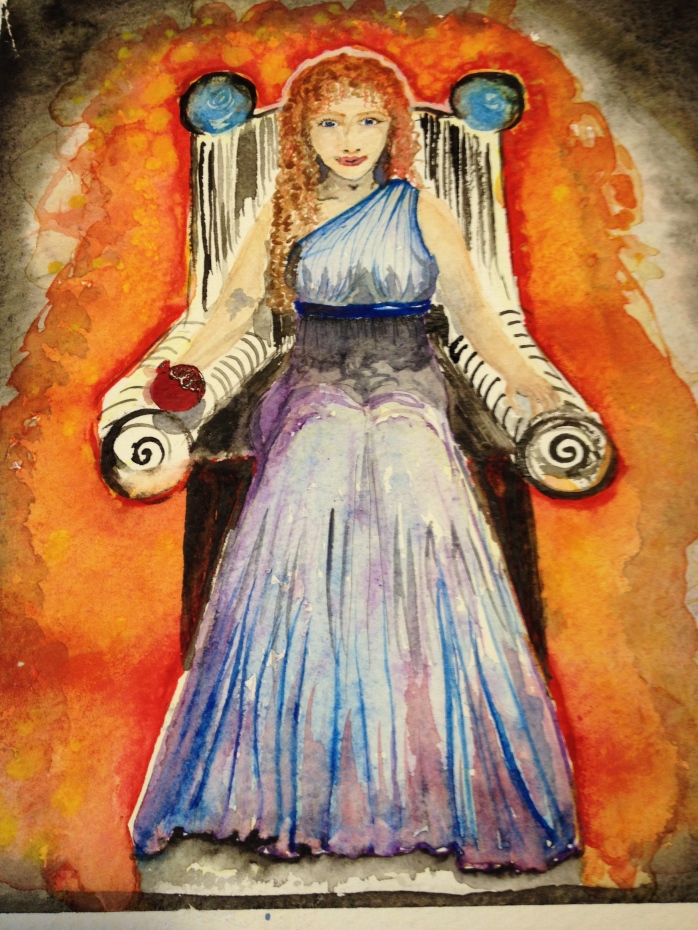 Sometimes it is nice to use the more forgiving mediums, like acrylic.  They offer the chance to play, mess up and try again.  Attempts with watercolor and ink are often a slow process filled with second-guesses and anxiety.  One wrong brush stoke and they will be added to the stack of rejects.  With acrylics I am fearless.  I can try things that may not work,  admit my wrongs and do it over.  This can mean starting over from the very beginning, keeping only a faint outline.  It is a nice change.  A couple weeks ago I got back to the eye.  My family asked what I was doing.    They asked “why?” it wasn’t done and I the only thing I could think of was “because it can be better.”  They had just assumed it was on the mantel because it was done, when it was really on display to remind me I needed to get back to it at some point.

I like the process that comes with these attempts at beauty.  The reward of doing something for its own sake.  The Eye of Horus has special meaning and so I thought it only right to try and do it justice.  Also known as the “Eye of Ra” or the “all seeing eye.” Each aspect of the symbol are representative of the 6 senses: smell, sight, thought, hearing, taste and touch.  (It should be noted that I took some artistic license with the classical proportions of the elements in the repaint.) 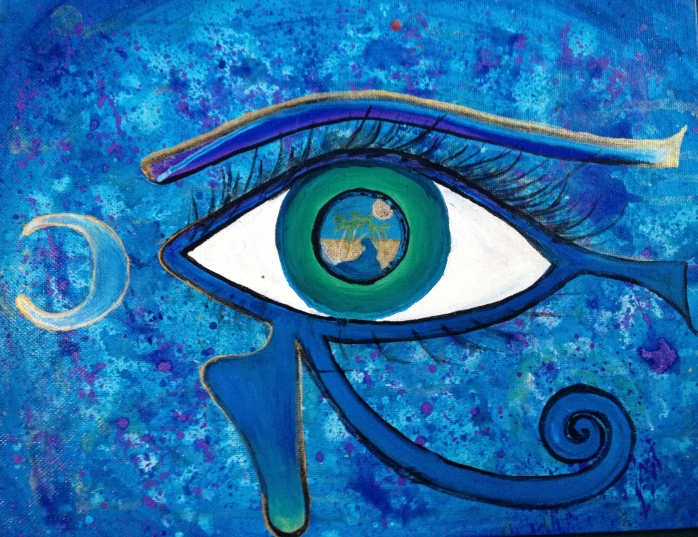 This is the way it was left for a very long time.  When I took it up again I realized I would have to rework the form entirely for me to like it.  This process of acknowledging my shortcomings is daunting and empowering in equal measure.  Like any basic transformation it is hard not to hold to the progress that has been made, even in the realization I am headed down a path I don’t want to follow to the end.  I took a deep breath got out the white and began the reconstruction.

I added some aspects of my own.  In the aftermath of yet another senseless act of violence, a tear seemed apt.  There is a huge part of painting and art that is expressive and therapeutic for me.  My art has almost always represented my feelings at certain points in my life.  Sometimes these impulses turn out to be prophetic and often I include things and only later find out with some research that they are inherent to the symbol or come into my life at a later point.

In this instance the left eye is represents the moon and the word for the symbol Wadjet comes from the word green.  I was inclined to include these elements prior to knowing how inherent they were to the history of the eye.  My intent at the beginning was to paint a symbol of protection for the house but it was little more than a bear bones attempt. 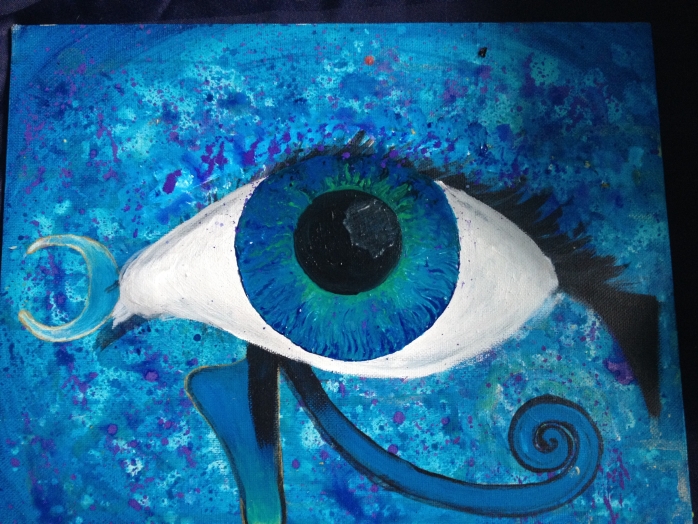 Once the proportions were more to my liking I found it easier to add the aspects that would make it complete.  I decided to (try) and make it a more realistic representation of an eye. 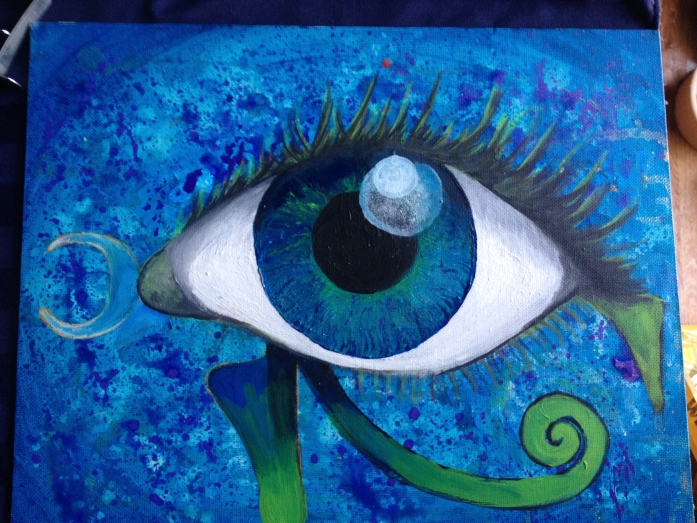 With work still taking up most of my days the progress was slow and my project has been spread over the dining room table for weeks. 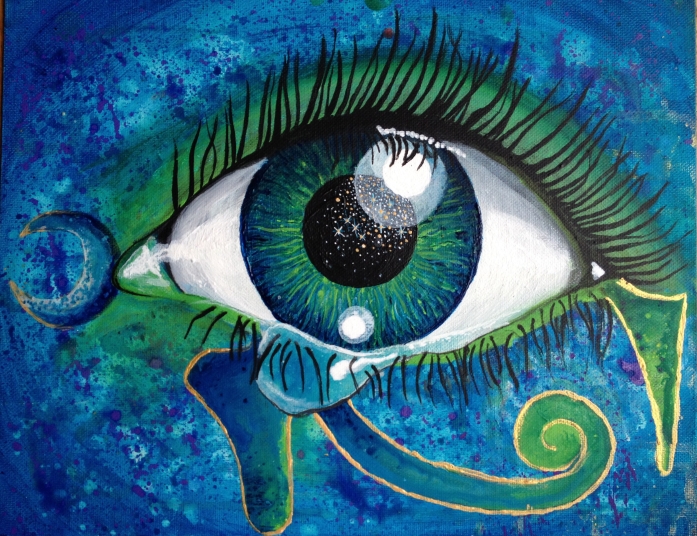 It is not don’t yet but much closer than when I took it up again.  I am at the point where I need to sit back and let it stare at me, let it tell me where I need to go from here.  Like most things about my life it is a work in progress and I am happy to be on that journey.

There is something freeing about looking at the things you don’t like and painting over them.  A process of making a thing more than it was before, of trying to add to it.  In a world were it seems like there is so little I can influence, art is a good way of making my immediate space more beautiful.

Learning how to be wrong is the most important thing I have ever done.  I have gotten pretty good at it, if I do say so myself.  Repainting old works is a physical manifestation of that process.  I’m not there yet, I can’t even say that I’m closer only that I’m trying.

← Just a Spoon Full of Honey
The Era of Personal Responsibility →

4 Comments on “Work in Progress”