News from the hive this year from most recent back:

Off with her head!

The new packages have arrived! 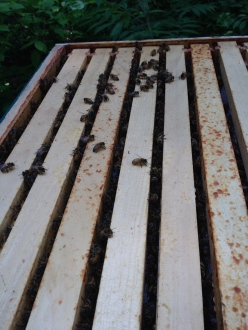 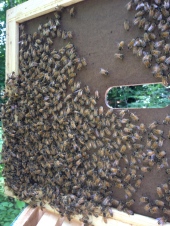 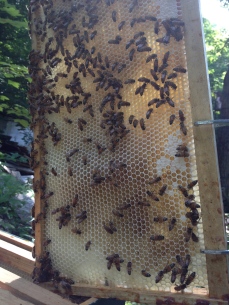 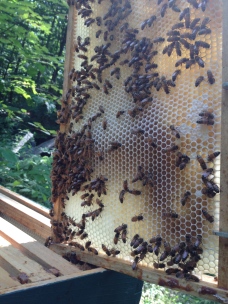 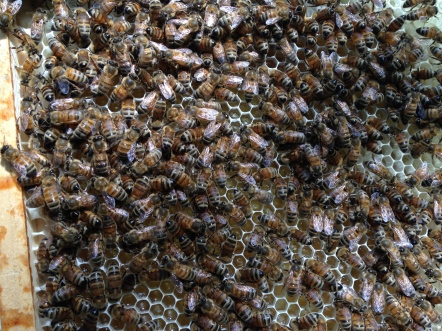 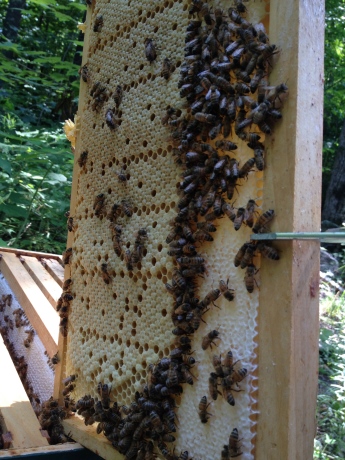 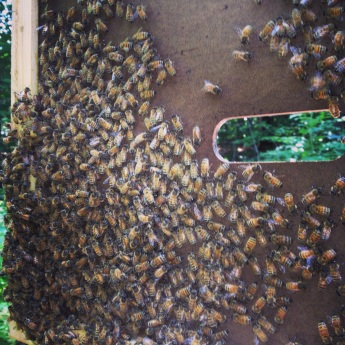 We got a nuclease in April.  This is one option for beginning a hive.  The ‘nuc’ consists of a laying queen and 5 frames of drawn out brood comb and workers.  The other option is to start a hive is by using a ‘package,’ where a laying (or virgin) queen is paired with workers.  These other bees are likely unrelated to her and require a time of adjustment.  During this time you hope that the workers accept the foreign queen and start the process of drawing out the comb in the hive so that she can begin laying.  If she is a virgin queen, she will have to go on her mating flight.  This can often be the only flight of her life … unless she swarms later in life.

To help the bees get food in their new home we gave them a feeder pail filled with a simple syrup.  Just in case they cannot find a source of nectar to sustain the hive. You need to supplement food if it is too early or late in the season for nectar and pollen to be plentiful.

After a week we went back to check on their progress, they had ‘drawn out’ the comb from the flat foundation wax of the other frames in the hive.  Empty ‘drawn comb’ looks like this:

The glands produce ‘wax scales.’ These scales harden and are mixed with a secretion from the bees mandibular gland and become pliable.  When they are constructing comb, the bees warm the wax to 109 degrees F.  When bees are in the process of building comb they often form ‘festoons.’  The workers will link their feet together in a bee chain.  The reason for this behavior is not entirely known, but it is thought to have something to do with the spacing and creation of the wax cell structure.  It is really VERY amazing to witness these little ladies do their thing and transform flat foundation to perfect cells ready for filling.

When starting out in a new place, the bees will go around and fill anything larger than a ‘bee space’ (3/8 of an inch) with comb.  Any opening smaller than a bee space is filled with propolis or ‘bee glue.’  Propolis is AMAZING stuff- made from plants and trees, it has strong antimicrobial activity.  It also can be a huge pain in the butt since they will frequently glue things together that, as a beekeeper, you have to try to get apart.  I have to admit that prying things apart while thousands of bees buzz around yelling at you “I just glued that!!” is not as much fun as it sounds.

After the cells are drawn out they are used for many things: nectar, bee bread, pollen, honey or larva.  There are two different sizes of cells: worker (small/regular) and drone (larger cells).   The worker or girl bees are a result of a fertilized egg.  The drones or boy bees are hatched from infertile eggs.  Yes, this means that the boys have no father.  In fact the drones only purpose in life is to fertilize another queen.  They do not help out in the hive at all, they do not even have stingers.  The drones are larger than the workers and will not be tolerated over winter by their sisters. They are all kicked out in the fall so that they will not use any of the hive’s honey resources over the winter.

The queen lays only two types of eggs: fertile and infertile.  From these two types of eggs, three types of bees will eventual emerge … weird right!? Fertile eggs can become worker bees or a queen bee.  This distinctions doesn’t depend on anything the queen does.  I know, I know, things just keep getting stranger.  It is actually the worker bees that decide to make a queen.  The difference between a worker and a queen is diet.

All eggs hatch at 3 days and all larva are feed between 150-800 times a day!  ‘Royal jelly’ is fed exclusively to larva that are to become queens.  Drones and worker bees are feed ‘worker jelly.’  The cells are capped with wax at 8 days for a queen, 10 days for a worker and 11 for a drone.  They emerge at different times too- a queen only takes 16 days total to emerge, a worker 21 and a drone at the sleepy pace of 24 days.  The workers cycle through many jobs as they mature.  During most times of the year a worker bee only lives about a month.  A queen can live for years, but will usually be replaced by the hive when she starts run out of fertile eggs, usually around 4-5 years.  They simply construct a queen cell, force her down there, and make her lay.  Then when the new queens (they often start with more than one) emerge they will kill each other and the old queen.  There can be only one!

There you have a small bit of the bee basics.  I was told that there are ‘bee keepers’ and ‘bee havers;’ we will endeavor to be true bee keepers, not just people who have a buzzing box on a distant part of the property.  We will continue to update the events in hive life as they arise.