Time May Heal All Wounds- But It Makes Homesickness Worse 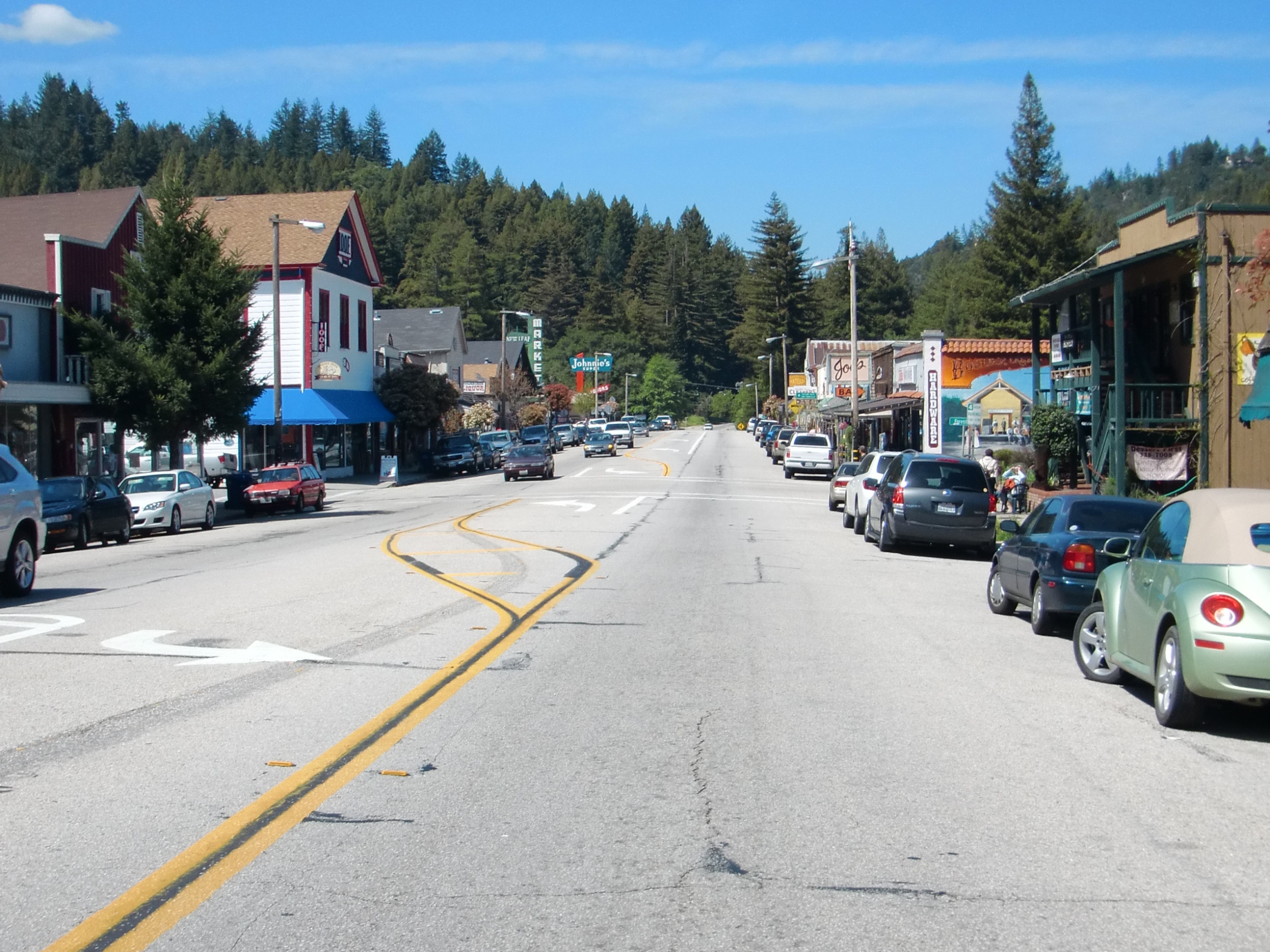 My little town has always been the core of who I am.

Even now as I sit thousands of miles away-it feels close enough for me to touch.  It still stings my heart that I am too far away to do so.

Boulder Creek still looks the way that most towns in the West used to.  Something I never appreciated till I moved East.  It is still stuck in a time when California was a wild place as far from civilization as could be reached by land.  The “edge of the continent” as my Dad always said.

Where brave people dared to move away from all the safety and civility that came before.  Hoping for something better. Or at the very least an exciting adventure to tell back in the city, if they returned to it.

Mostly I think it was the spirit of self-reliance that inspired people to come here. People who wanted to answer to no one but themselves and live the way they wanted.

Plus the lack of wicked cold winters probably helped.

Boulder Creek is a quintessential frontier town, one main street lined with stores and shops. 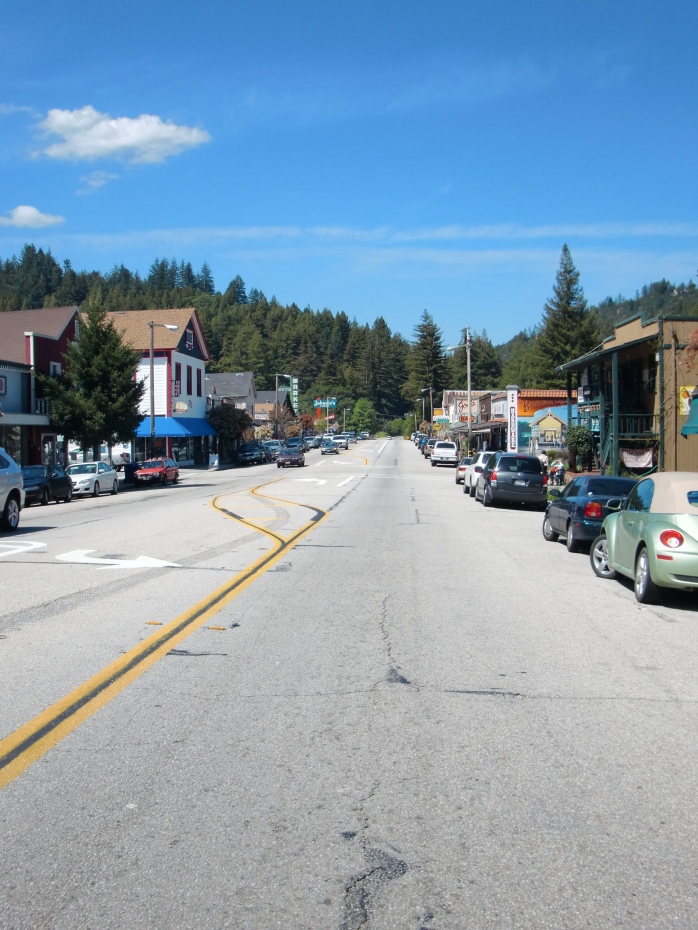 These small businesses may not have everything you want but they will provide you with everything you could need. The whole of downtown contains not a single traffic light of any kind and only one main intersection.

There are no chain stores here, not one.  Everything is owned and run by the people who live here and it shows.

I have always said that Boulder is made of equal parts hippy and hick.  At the end of town is Jonnie’s market, a huge florescent arrow points down at the front door from its roof and flashes “Liquors” in bright blue green lights. 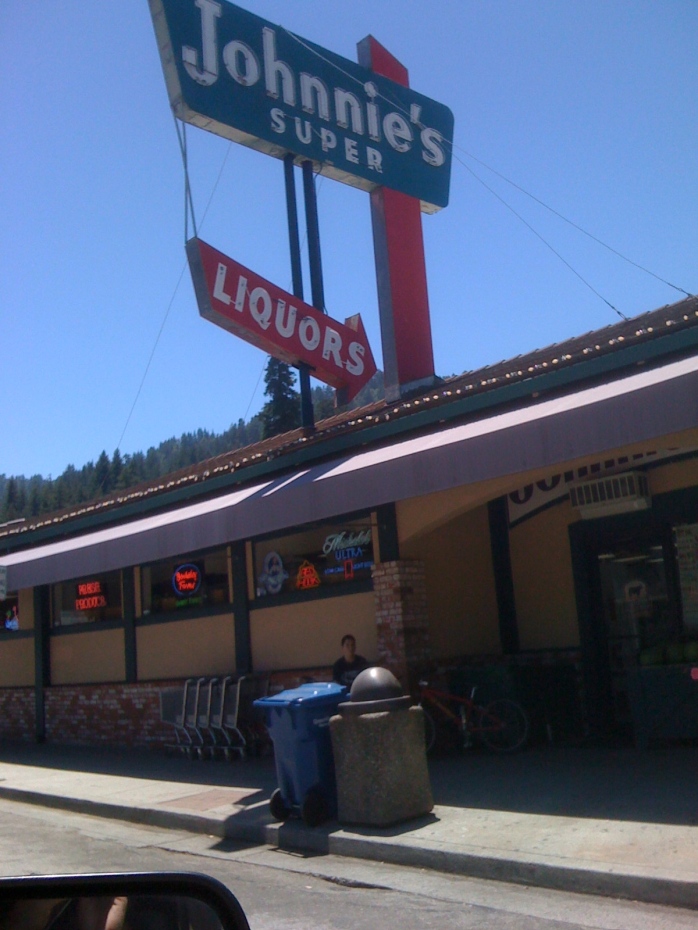 While right across the street stands New Leaf Market a hippy whole foods store.  Both have enough business to prosper.  In fact both are necessary for the needs of the town folk.

The economy is a local one.  We are the gateway to Big Basin State park but tourism is not something necessarily encouraged by the locals and certainly not to be depended on for anything as important as earning a living.

The old buildings remain largely untouched by ‘progress’ unable to expand from their original foundations by the forest, river and mountains that made their initial existence possible.

The fronts of many buildings still carry their original signage.  ‘The Brandy Station’ is written in yellow letters above the building that was the town bakery in my youth and is now a Chinese takeout restaurant. 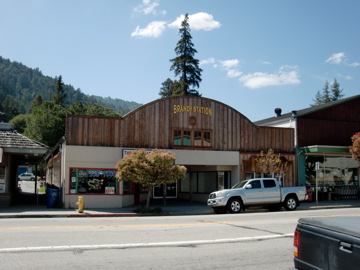 “Mac’s 100 Year Old Place” adorns the wooden awning of the building where I had my first job.  Then a restaurant now an antiques shop. 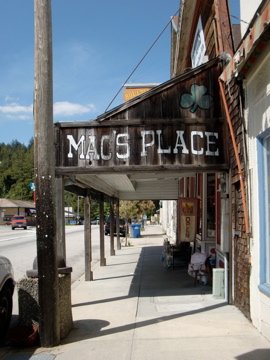 Murals of town at the turn of the last century are painted on a number of outer building walls and they look almost the same as the current vista only the fashions worn by the town folk have changed.

This was and still is a logging town, founded on the harvesting of the forest that guarded us from the outside world and made our little haven possible.

The mountains were not the safest place to raise children and that was not the reason my parents chose to live in Boulder Creek.

It could be argued that- being forty minutes from the nearest hospital, only one sheriff for twenty miles, abundant earthquakes, regular and extended power outages and having poorly funded school system made it a horrible place to raise children.

This widely accepted sentiment that living close to everything (in case of accidents) and relying on school budgets to determine how educated your kids will become was not one my hippy parents believed in.

There may be safety and security in numbers but there is little in the way of self-reliance and the quite calm necessary to gain true self knowledge.  My parents wanted to live where it was beautiful and quite.   Where everyone has enough space.

They felt the best gift they could give their children was belonging in a place where you could see god everyday-in the face of a wave or meet him alone on a mountain top. They gave my sister and I the gift of solitude and then had the courage to let us go explore it.

Small town life means you know everyone and everyone knows you.  You are all tied up together in the communal web wether you like it or not.

There is no anonymity.  Your actions will be remembered, your family name and reputation will mean something.

Highway 9 is an entity in and of itself, it is the only major road in and out of The Valley.  The first 26 years of my life I drove or was driven on this road almost everyday.  I know its turns by heart and like most locals I drive it a comfortable ten miles above the speed limit and rarely break for the curves.

Once after driving a friend from out of town down 9 to Santa Cruz he exclaimed “That road is crazy!  Some parts don’t even have guard rails!” This sentiment baffled me.

It’s not bumper bowling!  You are supposed to stay in the lines, not bounce off the sides.

In my teens and twenties when I would drive home late at night from work in Santa Cruz, I normally had Highway 9 all to myself the whole way.

The bubble of my headlights only able to illuminate the immediate section of pavement on that winding road.

I would come down the hill at the top of town and there Boulder would appear before me. Not much more than a small strip of colorful buildings lit by a dozen signs and street lights.  Seeming to float in the endless darkness of space around them.

All around the mountains were pitch black framing this little strip of light. The effect of the town hovering at the end of a long ribbon of road with the moon and stars above, made me feel like all of it was lit up just for me.

As if everything had been waiting for me to come home.

It is an intangible thing.

A moment of true peace to end my night and remind me why I made the commute in the first place.

As the years passed, lights appeared one by one on the mountains forever changing that magic illusion.  A fact that still saddens me.

Had my life gone as I presumed it would when I was a sand covered child I would still be there, living in that ancient forest.

Small town life suits me.  For me there is no place more beautiful than those mountains that sprawl down the the sea and my little town nestled within them.

But this is not a story of realized expectations and childhood plans come to fruition. It is the tale of all the adventures I never intended to take, ones that made me a refugee from my land and sea.

All the things that make up my life now are as foreign to my intentions as they could be.  My story is made of all the inadvertent turns life has taken and how embracing that lack of control has resulted in those things becoming the most important gifts in my life.

In contrast to many of my peers I never had the urge to leave The Valley. Even those of us that have left The Valley seem to end up back there somehow. When you are a kid you call it “The Valley Curse” since it seems like no one is ever able escape for long.

As you grow, I think we all come to see it for the blessing it really is.  A silent acknowledgment that there is no better place- that you belong there.  To be honest I think it is the basic inspiration for this text, something so special should be chronicled by someone who loves it very much for being just what it is.

Big bright cites, far off exotic destination and stressful jet setting careers don’t quite compare to the feeling in your heart when you drive home late at night and can truly believe that the whole town was waiting up just for you.

← Perfect little Imperfections and Unintentionally Complete Projects
Spring time in Maine (Shut Up Ca! I Can Hear You From Here.) →