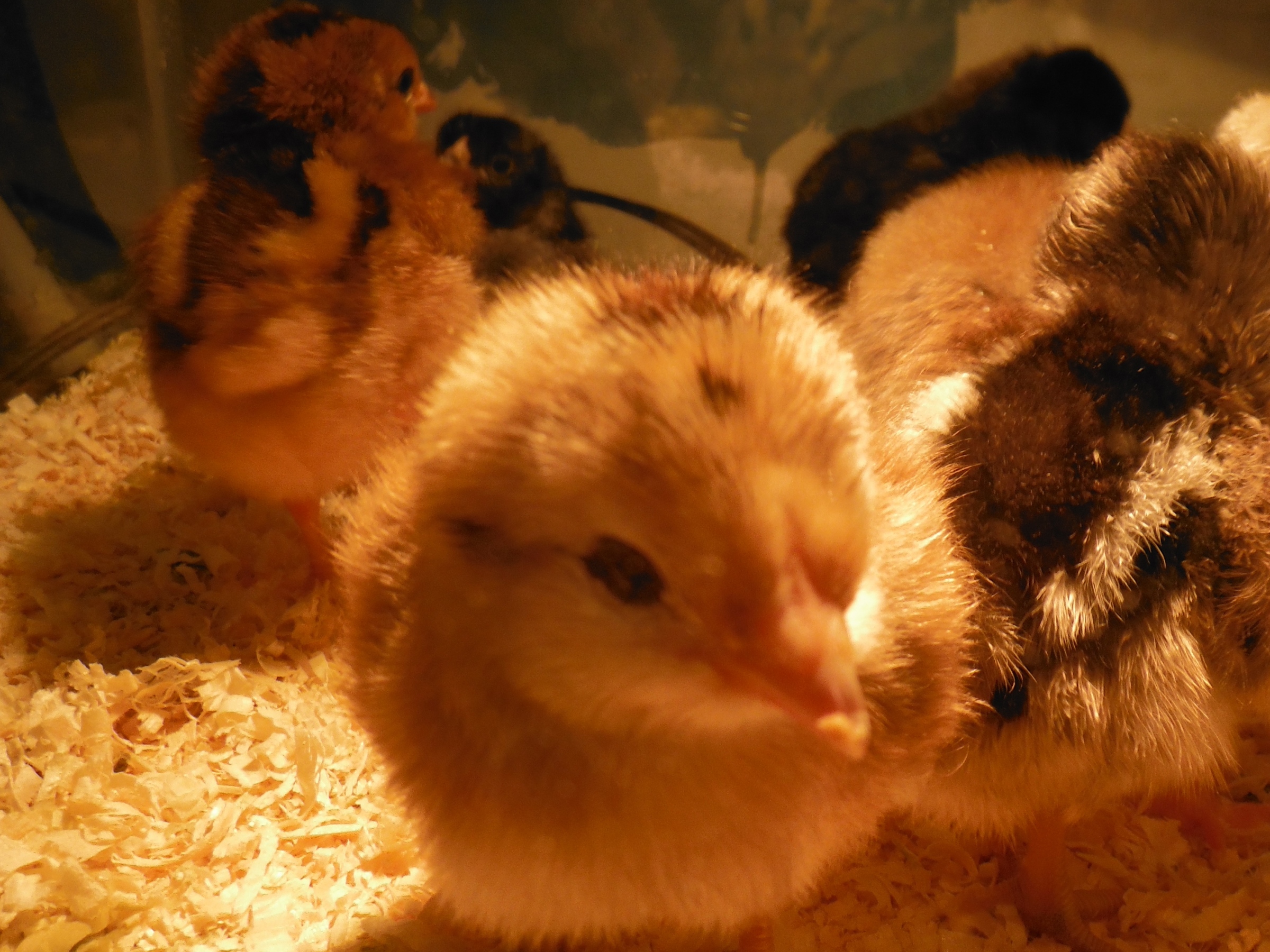 When I was young, my dad used to tuck me in at night and tell me a “Chickie Story.”  He would make these stories up on the spot with me as “Chickie.”

Most of the time these stories consisted of him rehashing what I had done that day- only in chicken land.  A while ago I wrote this Chickie story for the boys based on the last year of parenting and raising chickens.

If you have kids who will sit for it- I would love to know what they think!

Chickie was the last born chick of the spring on a small farm in Maine.  She was smart but smaller than all her clutch mates by half. 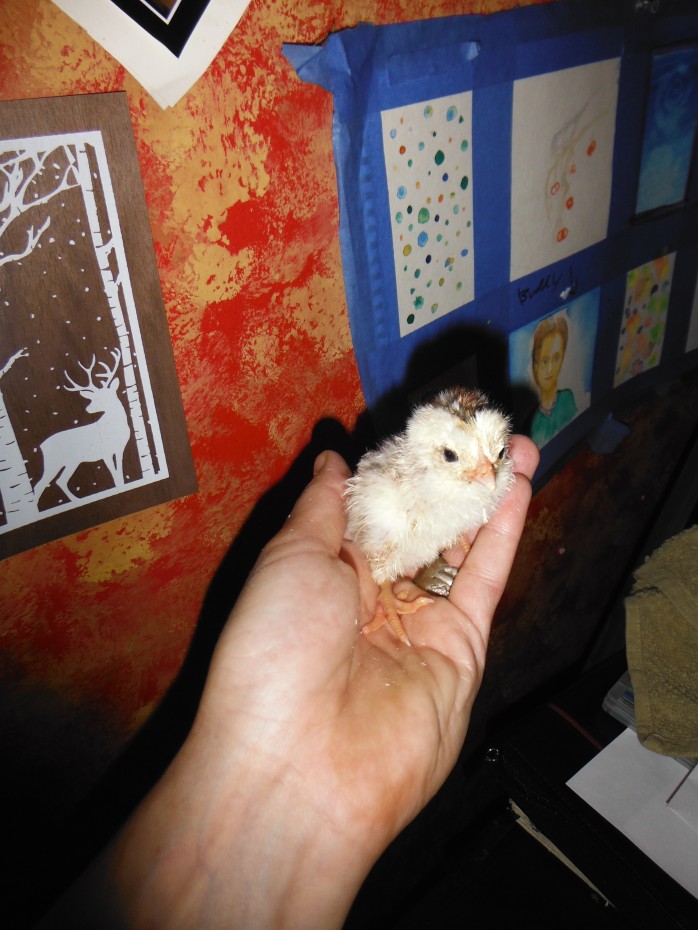 One July morning, when the youngest farm boy was changing the water in the coop the most beautiful blue marble dropped out of his pocket and was left behind.

Now chicken are curios animals but they are also very cautious fowl, things that are new and different are always looked at with suspicion.

The largest chick, Brutus was the first to spot it in the hay and alerted the other chicks.

“THING! THING! THING!!!”  he squawked.   All the chicks assembled to inspect his foreign object.

The next largest chick, Livvy built up the courage to poke the smooth blue thing with a stick she found.  She poked and everyone took cover.

The wise old rooster noticed what his chicks were doing and walked over chuckling. 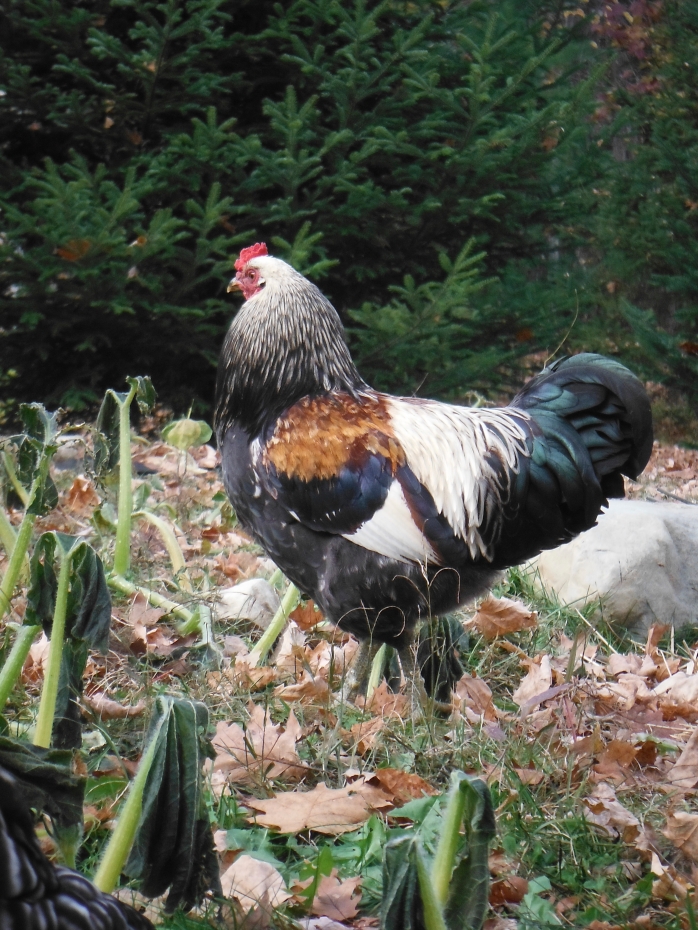 “That right there is just a doodad. It won’t bite you.  In fact I don’t think they DO anything.  The farm boys are always playing with them out by the front door.  They draw a circle and throw those little doodads around trying to knock the other ones out.”

“OHHHHH”  the chicks all chorused back in amazement,  Mr. Rooster knew EVERYTHING!

Chickie spoke up.  “Can we keep with it?

“Well it is not ours to keep but if you can all share it then I see no reason you all can’t play with it till the boy notices it missing.”

“What are we going to play?!” Livvy asked.

“You always want to play keep away!”  Whined Chickie

“Yah but it’s fun!  And you are the only one who can’t keep up, we can’t just play hatchling games all day.”  Chirped Abby.

“I’M NOT A HATCHLING!!!”  Chickie squeaked in her best mother hen voice but all they did was laugh and run off with the marble.

Chickie trudged behind,  “What a waste a summer day” she thought to herself.

The rest of the day went pretty much the way she feared it would.  All her brothers and sisters laughing and chasing and her left in the dust.

The one time she got to touch the smooth round wonder was when everyone took a second to drink some water.  It was hard and smooth and seemed to be shinning from the inside out!  She was awestruck.  She had never wanted anything more in her life than this doodad.

When her sibling returned they started the game again but Chickie was having none of it.  She took a deep breath and precede to throw the biggest fit in coop history.  She cried at the top of her little lungs, flapped her wings till her beak turned red.

And finally flipped on her back and stated flailing her feet wildly in the air.  It was quite a show!

“What in the name of earth worms is going on out here?!” Mama hen called as she walked over behind the coop.

“They have been playing with the doodad ALL DAY!!!”  peeped Chickie “I only got to touch it ONCE!! and Mr. Rooster told us we HAD to SHARE IT!!!!”

“Is that true?”  Mama asked the rest of the chicks.

“Yes”  they chirped back quietly.

“Well then Chickie you can have it till roosting time to make it fair but we are going to have to figure out what to do with this troubling little doodad tomorrow.  I will not have you all making such a racket.”

“NOT another peep!”  Mama said flapping her wings.  “That’s final!”

For a moment Chickie was the happiest chicken in all the farm.  Until that was she looked up and saw the looks on her siblings’ faces.

They all turned around and walked to the other end of the yard.  “Lets see who can jump the highest in the tall grass”  proposed Abby and they all skittered off toward the far end of the yard.

Chickie was alone but…

She had the doodad!

She tried to play keep away with herself but she always got it.  She tired to see how far she could kick it but that only lasted till she chipped a nail.

So she slowly rolled it around the yard till she got to the fence that bordered the chicken yard and the horse corral and there she sat.

The ground began to thunder under her tail feathers and Dusty Duke the draft horse came sidling up to her.

“What’s up little one?  Your brothers and sisters didn’t like your tattling maneuver Ehh?”

“Of course I saw.  Chickens are like TV for horses.  Plus with the fit you threw- I am pretty sure most of Maine knows something happened”

Chickie looked down at her feet and scratched the loose gravel.

“I NEEDED it.” she said quietly, a little ashamed now at how she had received the treasure.

“But, I REALLY, REALLY wanted it!”

“Yes and now that you have it are you happy?”

“Yes! Well I mean, I guess”  She could hear the other chicks playing at the other end of the yard.

Happy without the doodad and worse still, happy without her.  She felt very sad all of a sudden.

“Things don’t make us happy.  It is WHAT we do with them and HOW we do it that can give any doodad the power to give joy or take it away”

“It was not the doodad that made the other chicks happy.  It was what they were doing with it.  Unfortunelty the way they did it made you feel left out and hurt.”

“How you got back at them was just as bad and now you don’t have anyone who wants to play with you.  Did anyone really win anything here?”

“Well, no I guess not.  But they were being mean to me by playing a game I couldn’t!”

“Always try to treat people they way you want them to treat you, regardless of how act towards you.  Sometimes you have to show people how to behave instead of just getting them back anyway you can.  In those cases someone will always win but someone else will have to loose.”

“What other options are there?!”

“You could both win.”

Come here and I will tell you.

Three minutes later Chickie rolled the marble over to the other chicks and everyone stopped. “What now?  Are you here to get us in trouble again?”

“No, I had an idea of how we could all have fun with the doodad.”

“Did you?” Asked Livvy

“If we make a circle like the farm boys do we can split into teams and try to get the doodadd out of the circle for points.”

“No catch, I will keep score and make sure they everyone plays fair but when it does go out of the circle I get to get it and kick it back in.”

“DEAL!” They all shouted in unison.  “That sounds like a ton of fun!” said Abby.

“What a great idea Chickie!  Thanks for letting us play even though we made it hard for you earlier.”

“It’s no big deal” Said chick blushing a little through her feathers.

They played till the sun went down and by the time everyone went to roost they were as exhausted as any of them could remember being.

When they gathered to make their little chick bed Brutus kicked the doodad over to Chickie “you can have it while we sleep, I know you will keep it safe.”

“Thank you!”  She yelled and hugged her biggest brother hard.  The other chicks joined them and they fell asleep in record time. 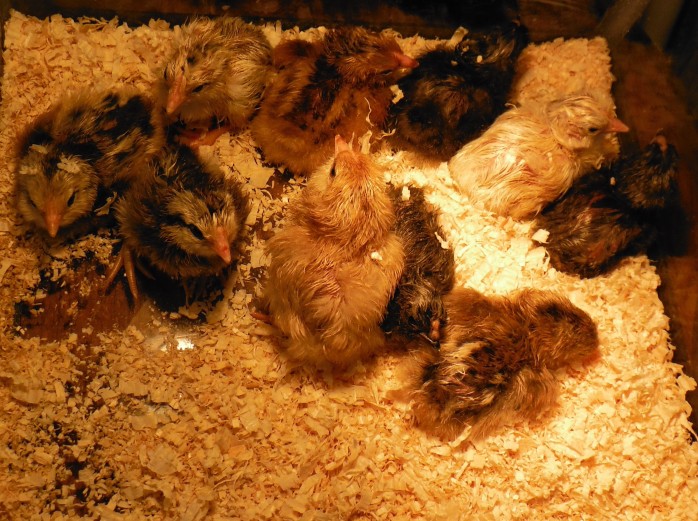 Chickie in the middle as always but somehow happier than she had ever been.

I have even done some drawings, someday I might actually get around to properly illustrating it.  We will see… 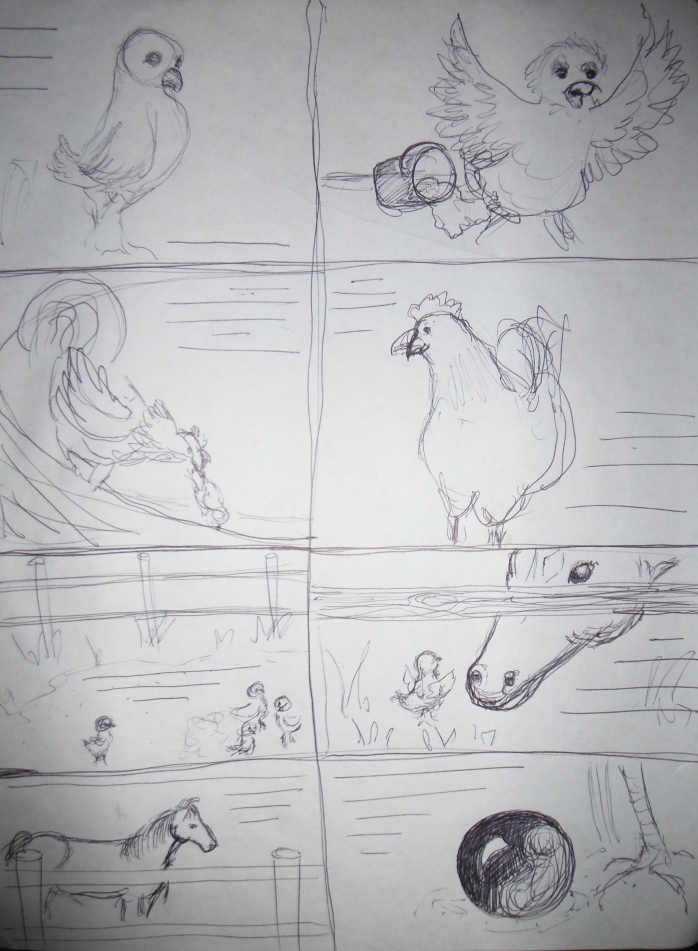 ← The Cotton Anniversary?!
“No Hour Of Life Is Wasted That Is Spent In The Saddle.” ~Winston Churchill →