When you are a student, the word summer is synonyms with freedom.  At least it was for me.  My last day of Kindergarten I thought, “Ok, cool.  That was fun.  Thank god it’s over!  Back to real life.”

Then came the next fall’s rude awakening; this whole ‘school thing’ was no glitch.

The last day of first grade I got it.  The proper pronunciation is:

The end to school work and early mornings.  No more school lunches, tests, assemblies and time enforced outdoor play.  Summer was here!   Fast forward a few decades, to me picking the boys up for the first week of their summer break.  You could see the excitement of summer baking off of them.

“I don’t have to go back to school for weeks and weeks and WEEKS!!!”

For adults working in the hospitality field (like their dad and me) summer means- working everyone elses’ vacation.   Many days we are overwhelmed by the sheer number of people all cramming into one space demanding perfectly rendered services.  Sometimes we do it proficiently and go home walking on air.  Nothing compares to the feeling of having done something difficult, well.

Like finishing the school year with good marks and a fresh start in the fall.

Those two sides of that coin combined one magical day this early this summer when we went to Step Falls.  I had to work but we got a room at the hotel and I was able to close the restaurant, go up stairs, sleep and make it to the 6am breakfast shift without a 3 hour drive in-between.  It was really nice.

Our northern location allowed us to get to the falls much sooner in the day than if we had left from home.  It is beautiful.

The water flows over the rocks catching in pools.

There are natural water slides from top to bottom. 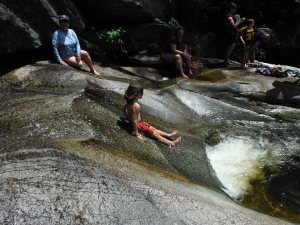 We tried them all.

With varying degrees of success.

Sometimes you had to just jump in and swim across.  The day was filled with sun, water, nature, family, laughter, road trippin’ and adventure but it can be summed up in one word and one picture:

The boys managed to wear holes in their shorts from sliding but they didn’t care.  We didn’t have to care about much that day; except looking at rocks (the area is well known for its mineral deposits) and hanging out in the glorious summer sun.

Even the long ride home was a blast.  The oldest navigated using an “old fashion” paper map and did really well; until he found a shortcut that took 20 minutes off the drive but required turning left when home was to the right.

We debated back and forth; him insisting that it got us where we needed to go and me assuring him we can’t go east, to get west.  On the back roads of Maine the options are limited. The phrase “you cahhn’t get they-ahh from hee-yahh” is proclaimed frequently.

It wasn’t till 10 miles after we passed a right hand turn, I asked him what way he thought we were going on the map?

We then had a conversation about map orientation and direction of travel, “you don’t even have to hold the map upside down if you just remember you are going down not up.”  He reasoned quickly.

We saw where the new route would have let us out and agreed, he had indeed found a very good shortcut.

With the calendar now asserting that summer officially over, I am grateful we had that day, when summer was at its best and everything goes perfectly because you didn’t plan any of it.