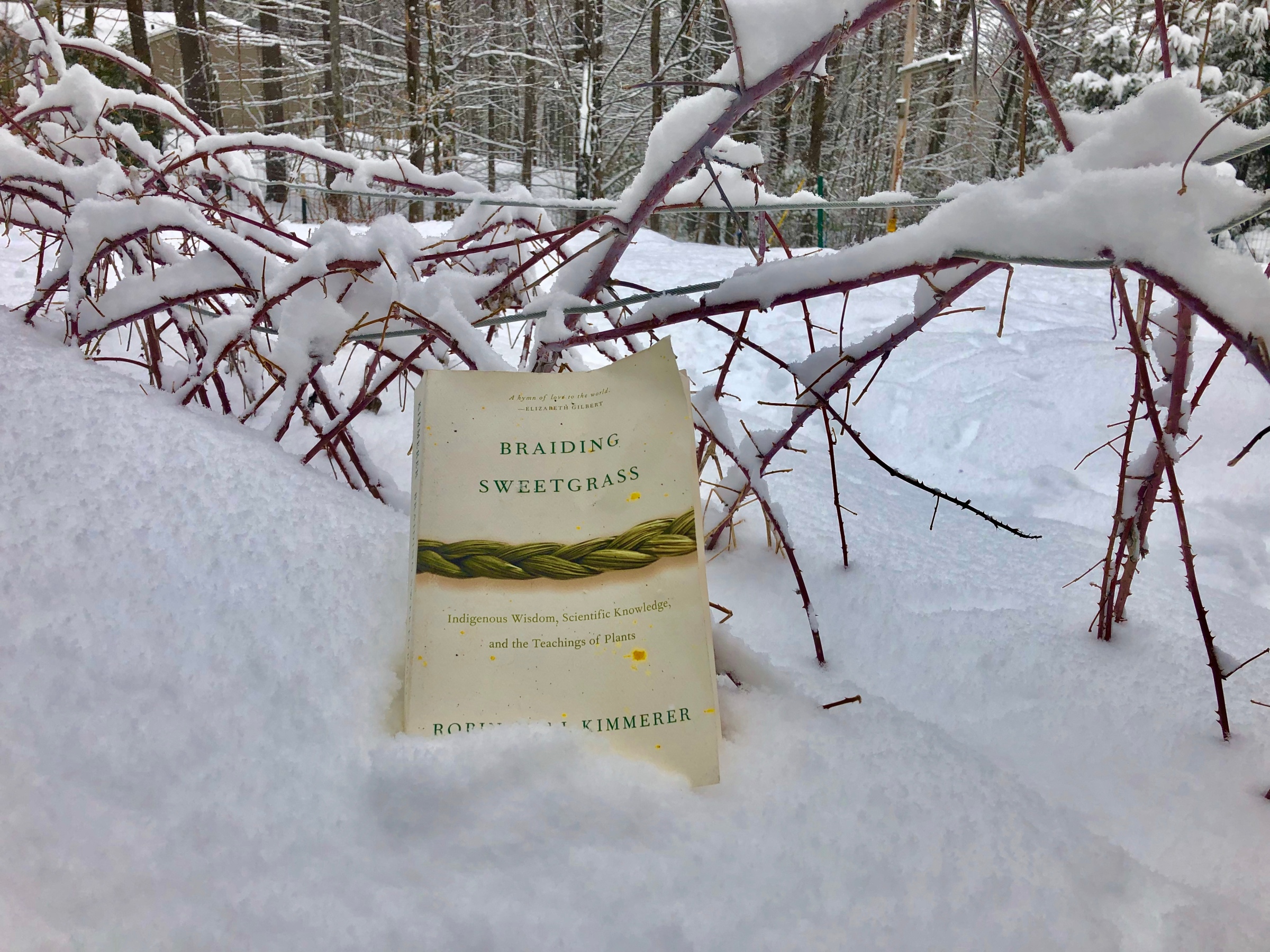 What was the step too far? Where have we gone so wrong?!  At what time did we lose sight of that essential thing that kept us in balance with everything else? Was it when we stopped roaming with the seasons and started cultivating fields?  When we settled into towns and then cities? Was it the arrogance of proclaiming ourselves better than all the other beings on this earth? What would living in line with our nature even look like in modern times?! Braiding Sweetgrass really flushed out these questions, systematically untangling the roots of the tree that is ‘modern man’ and explored how we can once again participate in the Honorable Harvest.

For a most of my cognisant years, I have struggled with my human existence on this earth. In my bones, I felt that something was very wrong. I had no idea where to start expressing these feelings, I am grateful to Robin Wall Kimmerer for taking up the task. Our actions on this earth are not aligned with the natural order of the world.  I struggled with how to define these things to myself. I had only questions, no answers. The beginning is always a good place to start and it speaks to her wisdom that the book begins with the story of Sky Woman.

I love the story of Sky woman- it was a creation myth I hadn’t heard.  Creation myths have always fascinated me and this one was no exception. I believe that the stories of our origins shape our attitude towards the world. It seems to me why Christians have no problem exulting humans above the rest of creation. The creation myth of the New Testament is all about how Adam and Eve were given dominion over the garden of Eden, a place where everything was provided for them without them giving anything in return.  There is no sense of duty to the system that sustains them, only a free-for-all of entitled taking. A tab that will never come due.

I much prefer the creation myths of indigenous peoples.  Stories that describe a web of life. A system that sustains itself through the participation of its members.  All beings are equal, all bring intrinsic value that feeds the whole, simply by living in accordance of their nature.  If you are a frog, all that is required is that you live your best froggy nature. Humans have lost touch with our nature.

I have a favorite quote on the subject, something I memorized it in my youth.

“We need another and a wiser and perhaps a more mystical concept of animals. Remote from universal nature and living by complicated artifice, man in civilization surveys the creature through the glass of his knowledge and sees thereby a feather magnified and the whole image in distortion. We patronize them for their incompleteness, for their tragic fate for having taken form so far below ourselves. And therein do we err. ( and greatly errr) For the animal shall not be measured by man. In a world older and more complete than ours, they move finished and complete, gifted with the extension of the senses we have lost or never attained, living by voices we shall never hear. They are not brethren, they are not underlings: they are other nations, caught with ourselves in the net of life and time, fellow prisoners of the splendour and travail of the earth.”- Henry Benson

I find it interesting that so many creation myths involve turtles as the origin of first life.  In Sky Woman I feel it is the self-sacrifice of the other animals; especially the muskrat, show for this new alien being, that is the first key to opening the gate onto the path that we should be walking. A path where we live gratefully on the earth that supports us. With the constant acknowledgement that we are forever indebted to the 6 inches of arable soil that make all food and life possible.  We owe the finite amount of freshwater for being. From conception on, we are cradled in a sea of life giving liquid. Yet we act as the soil is dirty, we poison the water as if it were endless and treat animals as savages forever forgetting that we are ourselves are first and foremost- always have been and always will be, animals.

I love that in her native language of Potawatomi, all animals and things are treated as beings on equal footing to humans.  The separation of human from animal, from plant, from element is one if the tangible examples I have for where we took our first missteps.  That companies and corporations are granted personhood over water and land is a transgresion supported by our language towards it as ‘thing’ and not ‘entity.’  Language shapes thought. It can be as enlightening as it can be destroying.

Language shapes our experiences, it is how we relay feelings from one person to another, communication is the origin of common ground.  The turtle of society. I think it is important to remember that language is not dependent on sound. If that were true; books would have no power, words would be nothing but organized lines, but instead they are the mechanism for telepathy (as Stephen King once said).  Words are a way of transmitting whole worlds from one brian to other. Why is it, that the language of plants and animals is not regarded as concise communications?

The way an animal moves tells a story, how their body is feeling, what they think about you, their intentions in the current interaction you are sharing.  In like manner, plants tell you their stories by where they grow and how, who they prefer to live with and how they grow and change throughout the seasons and years.  In a modern world that is obsessed with lights, noise and attention grabbing spectacle it is no wonder we have forgotten how to listen to plants and animals- to our mother Gia as a whole.

It is not only a change in language that needs to happen it must be all encompassing shift in our actions big and small.  We must return to the Honorable Harvest. People think conservation as taking less; when really it is careful, respectful taking that is needed on both sides.  It means not judging the kind efforts of others because they are not exactly your methods or traditions. In one of her student’s thesis project; Robin proved this scientifically by comparing the two harvesting methods of sweetgrass.  Both the individual blade harvest and the whole plant harvest plots were better that the ones not harvested at all.

Humans are so afraid of death and mortality we fail to recognize what all other life prepares for and encourages it as part of the generational process.  This feeling was more or less stated by her colleague at the outset of their research. “Anyone knows that harvesting a plant will damage the population.” She found instead that it is ignoring a plant that damage the population.  Ignoring a being is worse than hating it or being unkind. There is no energy exchanged and thus both entities suffer a lack of the other’s attentions.  Both parties are diminished and no forward progress can be made together.

This always brings me back to the greed of people.  It is the desire for too much. Our Windigo urges that have tainted us.  The want for more than one needs; or could even use, in a lifetime.  When the possessions of a few; drain so much for the whole that, the system cannot sustain its inhabitants we have a big problem.  When the methods for obtaining said excess destroys the land we are burning the candle at both ends. It is indeed Windiego nature that has cut this path we have followed for too long now.  We were not mislead by others, we lacked discipline in our own habits and appetites. Fear of ‘lack’ has driven humans to take more than they need. When we do not trust the earth we live on to provide for us, as it always, has we take that first step down the path of the Windigo.

If we sit quietly and listen to the way things are,  not just the verbalisations of animals but the habits of plants and insects we can begin to find our way back to the place where this healing journey for our kind needs to start.  Away from the lights and sounds of our fellow man there is peace and plenty. It requires careful consideration and hard work to harness the bounty that we are provided but everyone is elevated through our communal efforts.   The way back to living as the descendants of Sky Woman is found through listening, caring, loving, being grateful and giving back.

It requires trusting the earth will provide for us.  This does not mean waiting for it to be handed out on a silver platter, the action of seeking and harvesting honorably create the situation for all to flourish.  We all have to go sit alone in the woods, fields, bluffs and mountain tops. We have to remember to listen before we speak with our fellow lifeforms. We have to remember that we have more to learn than we could ever teach.   With a beginner’s mind we can approach even our well worn paths with curious love at what this new day has laid along its side. There is so much that changes in the night. Like the silent migrations of salamanders; if we don’t take the time to look, we will never see how these systems connect.

It was not something we did that lead us to this Windigo place, it was the WAY we did it.  A poised root that took without giving or gratitude. I am grateful to Robin Wall Kimmerer for taking the time to put words to feelings I have had my whole life.  She gave me hope for a structured and objective plan back to turtle island. Her methods are provable the impact of her attitudes in action can be measured. Instead of feeling that this problem is so overwhelming that any attempt to begin will be insignificant she assures us that seeking out and participating in the Honorable Harvest is the way back to finding our nature.

Through service to the system and education of the next generations in how to properly husband both plant and animal cohorts, we can enact meaningful change.  With time, these new habits will be the pivot point for our people. It is the point on which we will turn back and do right. The old ways, knowledge based on loving kindness is the compass we need.  Stewardship of the land we live on will help us draw the map back to the turtle. There is no treasure under the big red “X” on that map; only a simple dwelling, supported in a web of life, where one can live simply with gratitude, in service to Gia.

← She’s Got the Whole World in Her Hands
Homesteading Triage →

5 Comments on “Ashes of Sweetgrass”