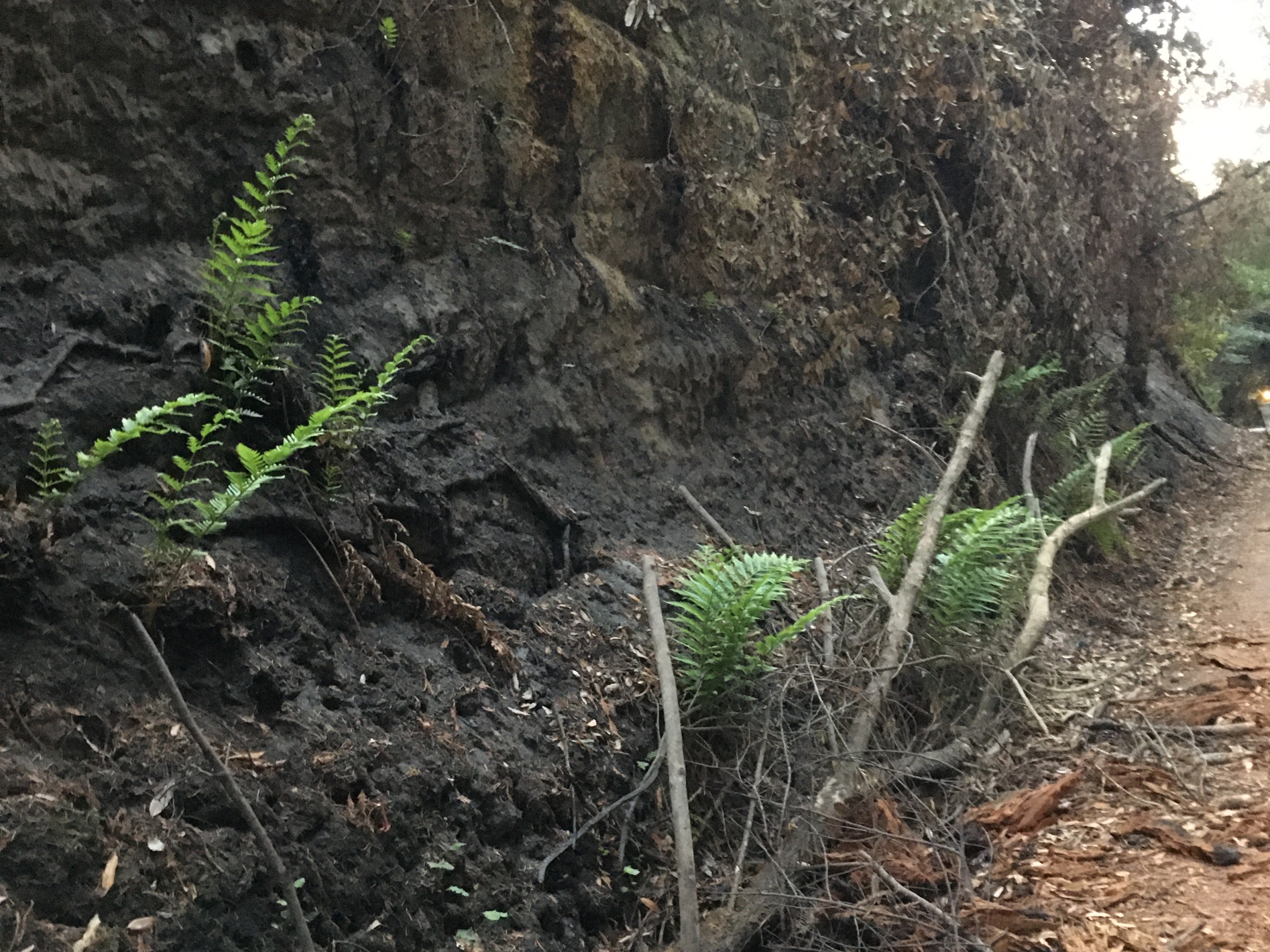 Thanks to the miracle of FaceTime, I could read the excitement on my mom’s dimly light face as she sat on her deck high in the redwoods, listening to the howling. “Can you hear them?!” She asks through her grin.

I smiled too. “Yep, those are some howling mountain folk.” We both giggle. She lets out a howl of her own, joining the chorus. I was tempted to myself, but the silence of the Maine woods surrounded me. Reminding me that while I’m on my own deck outside our house, I’m not home.

Santa Cruz country was one of the first places to declare a shelter in place order for the residents when COVID-19 started spreading across the country in February and March. The majority of the population took it seriously and stayed home. In order to keep connected (and stay weird) someone decided to start howling with their neighbors at 8pm every night. I believe it began in Boulder Creek and quickly spread down the whole San Lorenzo Valley. A tragic foreshadowing of the wildfires to come.

On the morning of August 16th lightning started fires in multiple places in our mountains. Less than ten miles from my mom’s house.

My homeland had violently been set ablaze.

Evacuation orders were issued for the town by the night of the 16th. The flames quickly engulfed the mountains cutting off the backroads leaving town and making one direction of Hwy 9 the only way of egress. Wildfire raced over the ridge to the sea, and down the bottom of the valley toward Santa Cruz.

Evac orders were issued for each valley town in succession as night turned to day. Many people found places to stay a town or two over, only to be evacuated again, with all manner of animals in tow.

The exodus of my people had begun.

Our little volunteer fire department was overwhelmed and unassisted for days. Air support couldn’t come in because of the smoke and many neighboring departments were dispatched to their own fires. They were outmatched by the power of the inferno, some losing their own homes, and all watching our well-loved forests burn. The mountains surrounding town looked like Morador, but they never gave up.

Together with those who chose to stay, they worked day after day, cutting fire breaks and raging against the devastation, both physically and mental. Some with fire hoses, others with chainsaws, some on dirt bikes. One man, in a kilt with a garden hose, on the roof of our only gas station.

Armed with said hose and his phone, he gave everyone the chance to see the current state of town for themselves, as rumors swirled on Facebook:

“Downtown is in flames”

“Burnt to the ground”

It was all fake news.

He is just one of the regular folk who stayed behind, as everyone realized that we were alone in this. Help would be not coming faster than the wall of flames.

A handful of my childhood friends refused to leave as well. Most have been tree workers for their whole adult lives. They are folk who grew up walking (or riding dirt bikes) through those mountains from one end to the other. They are men who feel stewardship of the land and trees is not a vocation but a way of life. Their efforts and in-depth knowledge of the terrain made them indispensable, a great many of us owe spared homes to them.

My sister was one of the few locals that could get through the blockades and back into town, thanks to assignments from the San Francisco Chronicle as a photojournalist and her press pass (many of her pictures made the front page!) On the second night, she was grabbing more things from my mom’s house (our mom was staying with her across the Monterey Bay in Marina) and saw the flames coming down the slope behind our home.

One of our neighbors (a man who had lost his own childhood home the day before) appeared out of the smoke like some sort of dirt-bike-riding knight. Together, they spent hours cutting a fire break behind the house. Armed with only shovels, jerky and granola, they save our mom’s home. Digging through flames and stomping out embers into the early morning.

They watched in horror as our neighbors house caught and burned. When it became clear that the only thing they could do was bear witness to the demolition, Sara snapped pictures through her tears. Our neighbors are amazing artists. That house had been a one of a kind expression of their life and family. It was truly one of the most unique and magical houses in town. We made sure that the were contacted with the bad news before they would see it in the paper.

I have lost count of the friends I know who have lost their homes and their parents’ homes. Whole neighborhoods are now ash. For weeks I’ve been floating. Trying to reconcile the tangible safety of my own home in Maine, with the burning of my mountains and forest in California. I have been completely unable to do it. From the disbelief of family and friends fleeing our town for the first time in generations; too late night texts of devastation, night after night. My head has never felt so far from the ground my feet stood on.

I didn’t think it was possible to cry more than when I grieved my father, or to spend more time on my phone than when I was breastfeeding my daughter, but this August proved possible.

How can I explain to people on the East Coast enjoying the end of summer- the rending of my heart for land, trees, people and houses lost in a state far away. A place that most here believe is always aflame anyway. My feed went back and forth; from happy family summer pictures to, Armageddon.

It is true that our forests have burned before, but not like this. The veracity and intensity of these fires is hard to comprehend. On social media, Post after post of apocalyptic landscapes filled my screen. Places I know and loved, gone forever. It could have been so much worse; after all it is not friends and family I am mourning, but there are enough plants, animals and landscapes lost to fill my soul to the brim with grief.

Social media allowed me to stay abreast of the communal reaction. A tribe holding tight to one another, while being flung apart. People reaching out for comfort, reassurance, or just reliable information about what was going on. I fell into a daily routine of scouring posts and contacting folk in order to compile spreadsheets of property checks and animal care (many feral cats and chickens were left behind as people evacuated) Sara and a few others were able to caretake these animals and give accurate information or provide photographic evidence of the damage to peoples’ properties so that they could begin insurance claims. As the days turned to weeks it became clear; that valid, updated information was the new lifeblood of our displaced community. They worked without rest for weeks on end.

Those initial days after evacuation many people posted that the first time the reality of the situation came slamming down was when they went outside their hotel, air B and B or campground to howl- and got only silence in return. After moving to more long term arrangements (with local bumper stickers in the parking lots) Just as many people reported that they began to feel hope again when they were joined by others in their evening howl. I can only imagine what the new ‘neighbors’ thought was going on.

The online town groups have been a lifeline, sharing art, songs, stories, reaching out for reassurance when hope faded, people adrift in a vast sea of uncertainty sharing what little they have left without hesitation. I have never been so proud to be from Boulder.

In the darkest hours of our town’s history, people are supporting one another, giving freely of anything they have left and making plans to rebuild together. Evacuation orders have been lifted and many people have been able to return. For others, the journey home will be long and I can only hope that the support of the community will carry them through. Our little downtown still stands, but many business owners lost their own homes. Even after their own losses, they are working to open their storefronts to serve others.

The CZU complex fires are now contained. Its final stats?

Luckily, only one fatality and one injury. Considering the speed at which the fire spread; leaving only one way out of the valley, this is an amazing thing.

Multiple towns and areas have been effected but the majority of the homes lost are from Boulder Creek neighborhoods. Some estimates say that almost 40% of the coastal redwoods in the area have been destroyed. The water in parts of town is still not certified as “usable.” Test results of VOCs are still pending.

I sit here again on a deck in Maine missing my community back home. I am filled to the brim with pride for the love I’ve seen. From the offering of free professional services, provisions of food and water, organization of clean up volunteers and rebuilding efforts. People made groups on FB, sorting themselves according to insurance company in order to help each other navigate this strange new land of ‘damage claims’ and bureaucratic policies. Local Girl Scout troops made screens for people to sift through the ashes of their homes, and people sharing tips on cleaning refrigerators that were left for weeks without power.

The clean-up and rebuilding efforts have begun… Everyone pulling on the oars, doing what they can.

These last few years, it has been easy to despair at the manner I see my countryman treat one another. I have often been depressed and unable to write anything of value. Seeing the response of the town folk to this disaster, watching them care for and love one another so deeply has given me hope. We are a town often divided down political lines and philosophies, but together they have begun to howl again. Lifting primal voices to the darkening sky, baying together at night and making ready for what comes next. The forest has begun to grow anew, maybe it is howling too.