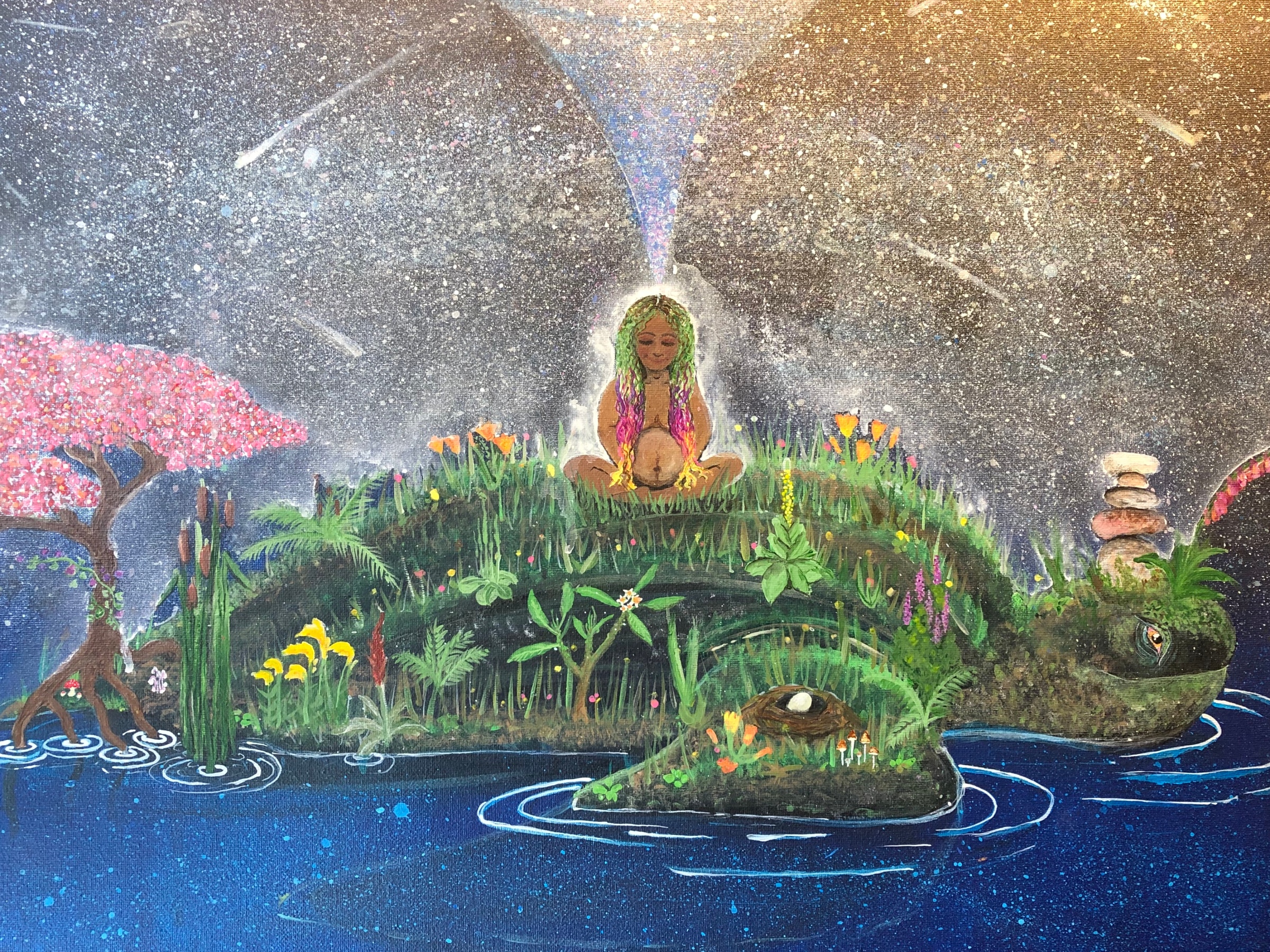 The mountains all lush and green, ready to provide food, shelter and medicine.

All the other creations waited patiently for their new brothers and sisters.

At first Gaia was elated,

“They are so smart and entertaining. They get along well with the others, giving thanks to their siblings and me, why didn’t I do this a long time ago?”

Mama Gaia was tired and things seemed to be going well.

Her systems grew bountiful, they fed, healed and cleaned each other.

Creatures respected one another. Recognizing that they were bound together in life.

“A little nap won’t hurt” She thought as she listened to the far off beat of drums and singing.

Dancing feet, bare against her flesh, pulled her down to sleep.

Her dreams were invaded by a smell.

As if something big was on fire.

Everything seemed to be burning without flames.

Smoke and smog filled the sky, where multitudes of birds used to fly.

She tried to find her feathered, finned, four and many legged children, but most were gone.

The others cried out to her in pain, asking where she had been and why she had left them with such brual beings.

She saw the humans crawling over more of her surface than they had right too, sprawling regardless of need, trying to fill an insatiable want for more.

She leapt around trying to fix broken systems.

Creating space for things to heal, but the humans kept coming.

They didn’t care that there was no place for their toxins to go.

That they had broken and disrupted things to the point of collapse.

She tried to bring the medicine back, to make them see that she had given them enough, and there was no need for this pillaging of more than they could use wisely.

They didn’t hear her, because they had stopped listening to anything but their own want.

She took a deep breath to yell at them so they could hear her above the din, and coughed.

Where did the sweet air go?

What had they gotten in exchange for this filth?

She saw as they dig into her flesh, mining shiny rocks and stones.

They worshiped these lumps above themselves and each other.

They were so angry and confused.

Suffering by their own hand, yet blaming everything but themselves.

She began to cry.

Only the smallest children seemed to feel her tears.

The children didn’t remember a world of plenty, as their grandparents did.

All they had ever known was smog, pollution and destruction.

With her last bit of strength she reached out to their souls, telling tales of how things used to be, how they could be again, if only someone cared.

Their hearts heard her invocation.

A generation who had never known a time without an endangered species list.

The smallest of the humans saw clearly; what grownups called progress for what it was, death.

They told their parents that it wasn’t more plastic toys they needed, but for Mama Gaia to wake up again.

They invented machines to cleanse the water.

They insisted on legislation to clean the air.

They challenged leaders on a global scale, with the inconvenient truth, fixing them with a gaze that brokered no argument.

They stood up for their mother earth with such force that things began to change.

They loved the world with everything they had, reminding the rest of us what it looks like to love Mama Gaia, our kin and ourselves.

← Is and Isn’t
Thirteen Mothers Before Me →