This journey is far from over and the things I have learned are immeasurable and priceless.  Every once in a while I am privileged to have some positive reinforcement that my thoughts and I are on the right path.

Surrender is not something to submit to or to accept and then bemoan the lack of control it brings.  Instead it is the honest and true acceptance that life will take you were you are meant to be.  Not that there is some grand design or puppeteer behind it all, only that like a chemical reaction your actions-mixed with your environment and the presence of others have a definate interaction with the outcome that you do not control.  Like this interaction of a broken hydrant and a storm. 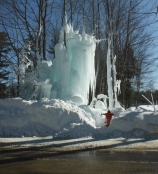 Like this, a broken hydrant line and a storm make a sculpture. 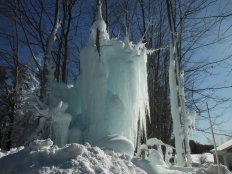 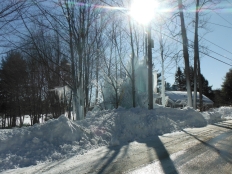 Without expectations I can be open and in the ‘arms of surrender’ I can be happy with the situations I find myself in.  Not pushing against what is, needlessly.  For every action there is an equal and opposite reaction.  If one does not react but only perceives, accepts and exists then you can find happiness everywhere.  Or at least acceptance of what is instead of wishing it were different.  Such thoughts only take you farther from the moment and impeded your ability to act openly and honestly since you have made your foundation upon of denial of the obvious.

When too much attention is payed to trying to figure why things are as they are the point is missed.  Along with any opportunity to act instead of reacting in your current state.  Looking back on my writings I feel that this concept of surrender may have been one of the things I have been looking for, one of the concepts that I was hoping to understand.

It is not like I am at a stopping place only that I have again added a useful concept to help define myself in this life.  It feels like progress toward what I do not know and will not try to define.

Only that I am moving with life not against it.  Often the concept of a path or journey invokes the concept of a static line laid out before you that you move along or across.  When it seems now far more likely that the path is not made of earth but rather water, a force that moves endlessly forward directed simply by gravity and pressure.

We are all caught in it and the more we try to tell it how it should move the more exhausting the trip.

Only in moving with it and surrendering to it’s path can you find your own way within it.  We do not control this life and any place where it feels like you do is but a momentary illusion.  There is no happiness in that, only a fleeting reinforcement of untruth throwing you into further unbalance.  To find your center amidst the torrent of movement is one’s only hope to be as YOU are- in the world as IT is and be truly happy in that place.  In this state you are able to act and create more joy so that it may spread to those close to you.

It also seems that this river does not flow to the sea linearly instead it is a whirlpool in a vast ocean with every revolution bringing us closer to the center and oblivion.  If I can believe this is true then the past and future are not inaccessible to me. Rather they are on either side of my current position.  Not miles upstream and a distant memory or some sort of future destination that I can not see from where I am now.

Life moves around itself spiraling in eddies, dancing with what is, what was and what is to come.  To separate them, pull them apart and straighten them out again misses the point.  It cuts off access to your past and leaves you anticipating the future as something separate from all that came before.

When really they are cradled in each other -constant companions to one another.  It is not you who created these entities or set them in motion.  They are a part of a larger system of existence and the acceptance of this is enables you to act in life as it is and that is-a gift that only you can give yourself.

Surrender: to give (oneself) up to some influence, course, emotion,etc.: She surrendered himself to a life of hardship. (that really was the online definition)

There is no negativity in that acceptance, only acceptance and being happy in the space you find yourself and that is enough for me.  Lakes do not aspire to be anything other than a large pool of water and in them we can find the peace and stillness of everything around them reflected on the surface.  Elevating everything without action.

7 thoughts on “My surrender to a lack of expectations”