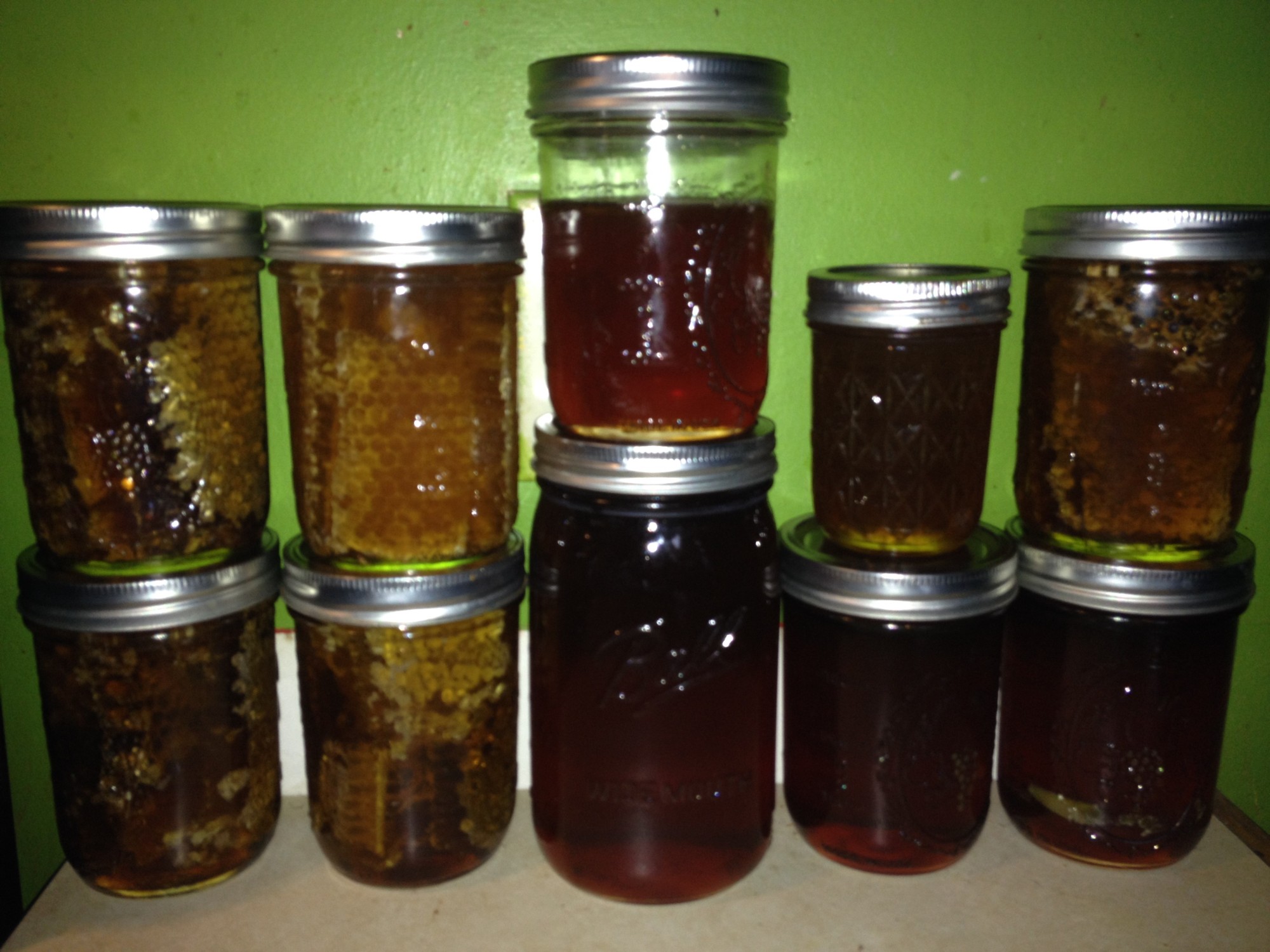 For my husband and me, a spoon full of honey does more than just help “the medicine go down” often the honey is the medicine.  For colds and coughs we combine it with summer tinctures or it’s eaten with pineapple (Pineapples contain an enzyme called bromelain that has anti-inflammatory properties that help reduce the irritation at the backs of our tongues and in our voice boxes.)

For cold symptoms that persist I add raw ginger, which is a beast to swallow without the honey but works wonders.  I also make a tea with raw ginger, lemon, orange and honey.  I was raised on homeopathic and eastern medicine, on this topic I have always said “taste bad, work good.”  The honey goes along way to mitigating the harsh tastes.

Honey is also good for skin care and healing wounds, as proved by our late dog, Honey.

We had recently run out of our own personal honey stash and so this last spring we got two new nucleases and started keeping bees again after taking last year off.  We have not had good luck when it comes to keeping bees.  This year kept with that trend and we had both hives swarm and go off within the first two months.  They re-queened successfully before they did so even though the populations dropped we still had functioning hives.  My husband was even able to find one of them in the middle of the woods, living high up in a hollow tree.

This winter, our track record of poor hive results continued and it would seem that in the fall hive #1 swarmed again, this time in totality.  Leaving us with an empty hive, which was sad.  We had half of an eight-frame deep box of capped honey, which was not! last week, after confirming that the rest of the hive was indeed vacant we brought it inside to be processed.

Since it was such a small amount I decide to extract the golden treasure without the help of any mechanism.  I used the lazy (wo)man’s method of cheese cloth, gravity and time.

I did some research and many people claim that heating honey, especially past 200 degrees not only mitigates its medicinal properties but can make it toxic.  Having eaten baking and cooking with honey for most of my life and I doubt that effects of heating honey are all that dangerous, especially when you consider that MOST if not ALL conventional honey has been heat treated.  Heat defiantly breaks down the Hydrogen Peroxide and other enzymes found in raw honey, which play an important roll in preservation and healing properties.

Still, since this honey in particular is often used for medicine I thought it was better safe than sorry.  I cut up as much of the capped comb as I could squeeze into jars and then smashed the rest, hung it from the side of a deep pot and waited.

And waited and waited. 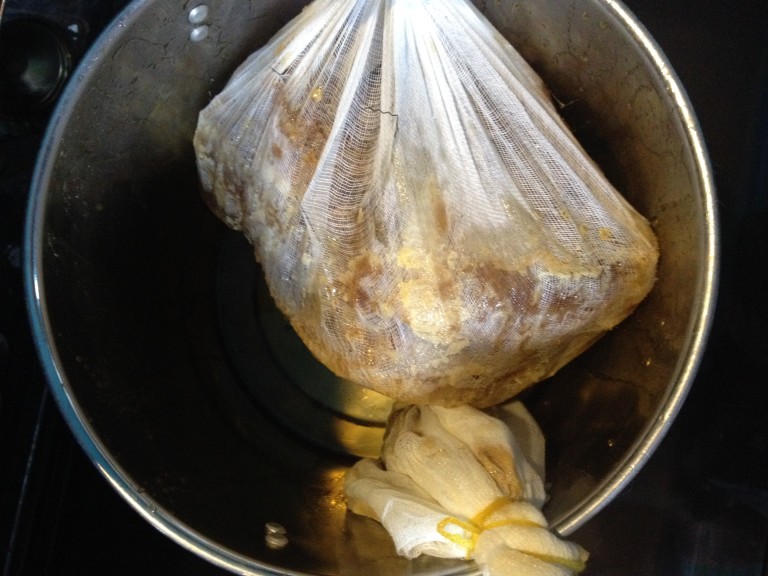 I got impatient a couple times and re-mashed/squeezed the mass for a more expedited drain.   I kept the whole thing in my oven (off) so that nothing could get into it while I was at work.

We ended with a pretty significant haul!

There was quite a bit of wax left over, so I used the cheesecloth and napkin method for filtering it.  NOW it was time for excessive heat!  Make sure the oven is not on much past 300 degrees since you are dealing with flammable materials.

I start with a pot with about an inch of water in the bottom.  This makes it much easier to get out when it’s done,  I even wipe the sides down with cooking oil so I don’t ruin my pot. 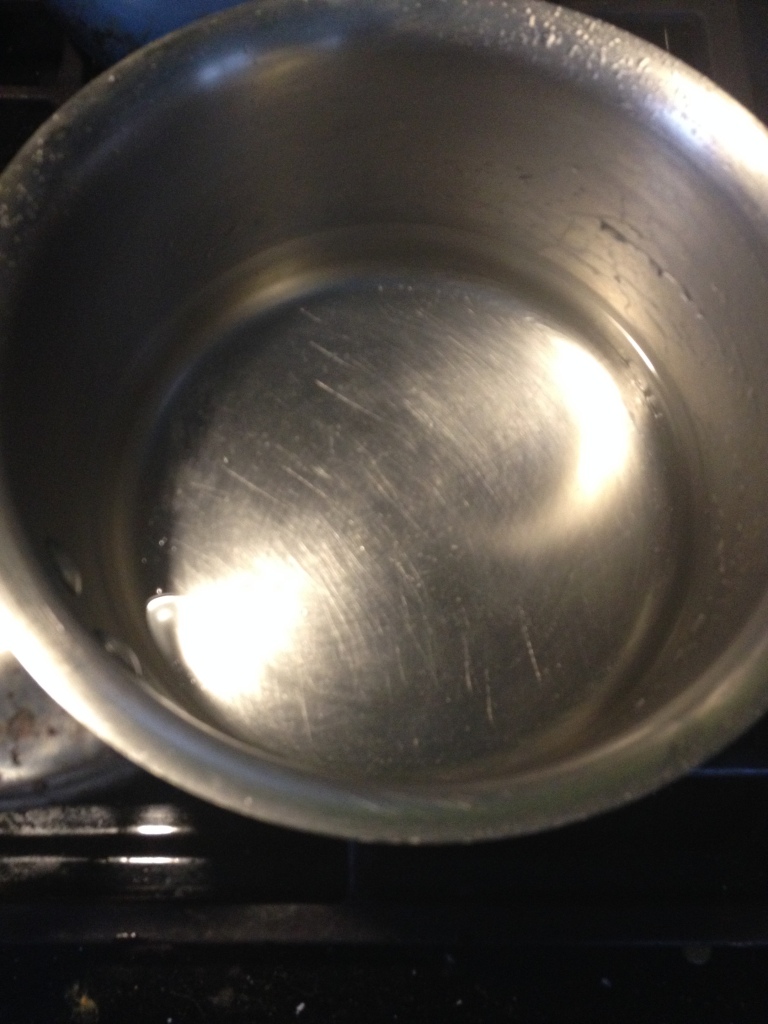 Then I stretch cheesecloth over the top and tie a string around the sides to keep everything in place. 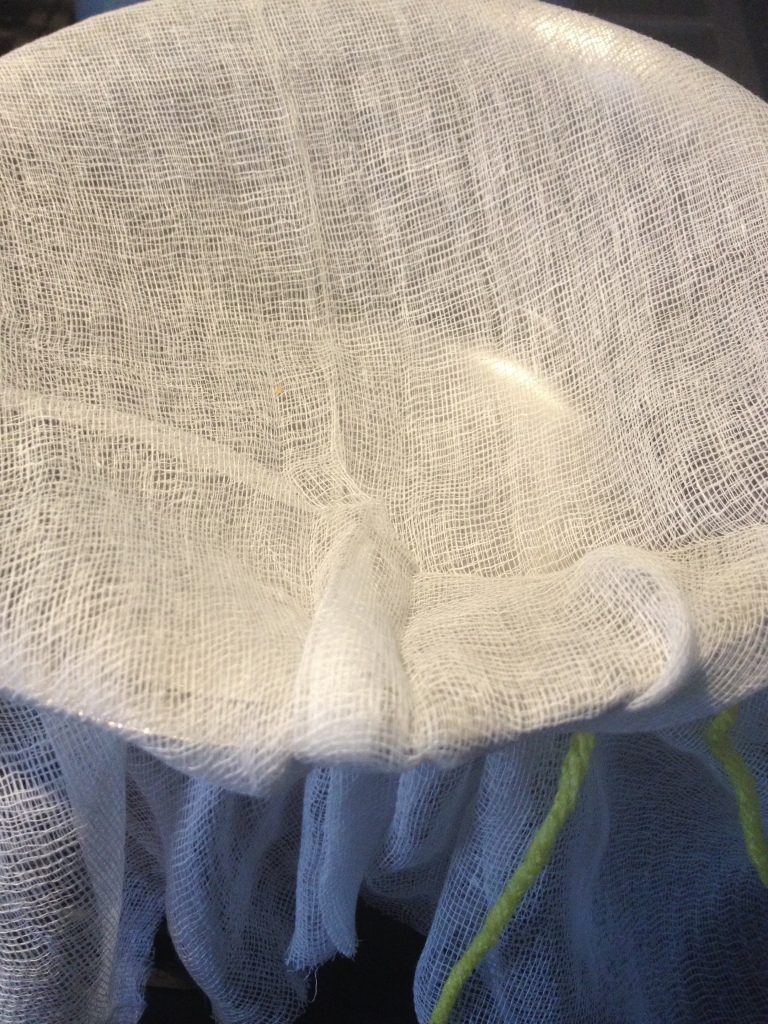 Then I add a napkin (further filtration) and the offending wax.  It might look pretty clean but just wait till you see when is left afterward.

Yuck!  We had another snow storm, which was perfect for cooling the molten wax.

I had hoped the snowflakes would make a cool pattern but I had no such luck.

We did make out with a huge disk of wax and many jars of honey for future use.  It is sad we are down to one hive but considering we didn’t harvest any from them this fall, I will take it!

3 thoughts on “Just a Spoon Full of Honey”