Does anyone remember that old riddle about how to get a cabbage, a goat and a wolf across a river with one boat?

That is what it feels like we have been trying to do recently.  I have decided to call it homesteading math.

With our final hatching of the summer now over I can finally count our chickens/guinea fowl.  There has been a lot of hatching, moving around and unfortunately loosing (there was a jail break while we were in Ca and we lost 5) of poultry over the past month.

Introducing the newbies into the established flock was (and still is) a process of trial and lots of error.

I hope that I have learned enough to make the combination of the guineas and chickens this winter easier but I am sure it will be a whole new set of issues to look forward to.

As of now the 5 guineas are outside in the original coop.  Which has been moved off the deck by my husband’s incredible mind powers.  “The force is strong with that one.”

All my little birds have left the nest and I could not be happier for the semi-quiet in the house.

When I introduced the new chicken chicks to the old I did it in several steps.  First, I brought over 3 hens from the older flock I knew would be nice.  Snowflake, Abby and Henrietta are calm happy chickens who I knew from past encounters would be fine with the smaller chickens.

Where you put the rooster changes the dynamic in any given coop and since one of the chicks that we hatched here and kept looks like a rooster I need to make some decisions pretty soon so as not to repeat last winter’s rooster juggling routine.

That sucked, no thank you!

Dude has gotten a ‘tude, as all roosters do but it is manageable.  I have to keep him apart from the little rooster I have no urge to even try and see what happens.  It could be totally fine or a blood bath… again, no thank you.

All this was done before we left for Ca.  When we retuned we were minus a 5 chickens from the outhouse coop (4 new pullets and 1 old hen.)

Ok, so now we had 13 chickens left in that coop.  I did my final round of mixing the hens (and one young rooster) I took Dude to the outhouse and brought  everyone else to the A-frame.

My degree in psychology has helped much more than you would think.  After all, phycology is the study of behavior there has been need for a lot of that all through this process.

Any hens that showed consistent, overt aggression toward the younger ones where deemed “mean” and relegated to the outhouse.  After the feathers settled we now have:

4 chickens (1 rooster and 3 hens) aka the “Meanies” in the outhouse coop.

19 chickens in the A-frame coop, which you can see is now camo green.  There are 9 older hens and 10 younger (9 pullets and 1 confirmed cockerel)

You can see that the younger ones do stay separate from the older ones but over all they are re-working the pecking order nicely.  We have one feral chicken who flies the coop every morning and tries to lay her egg in the old coop (now the guinea coop.) 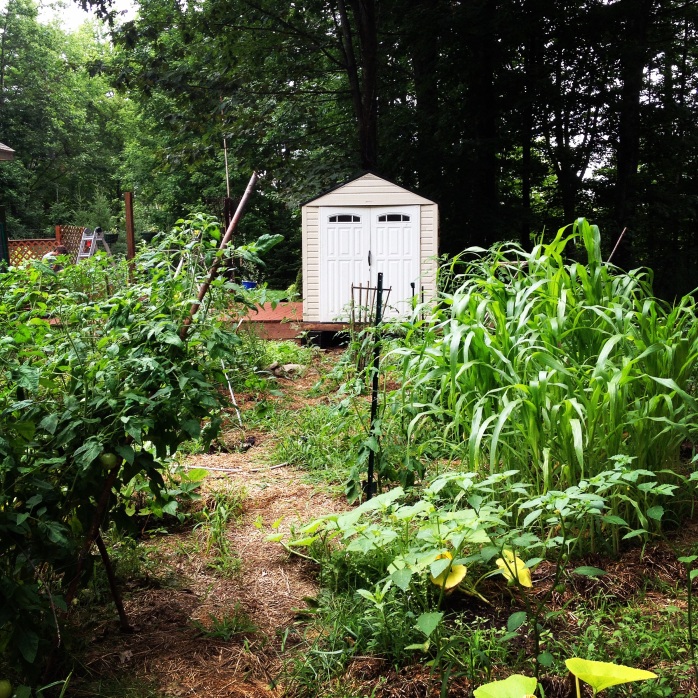 For the past few months she flies over the fence right after I let them out and runs off screaming.  She goes back to the old coop lays her egg and then spends the day running around the outside of the fence lines of both coops, clucking/squacking her head off.  Every night she puts herself back into the A-frame coop, sleeps, wakes up and does it all over again.

This behavior has earned her the name Spaz.  Short for Spastic- it fits her well.  She has been loosing her mind the past few days since she can’t get into that coop to lay her precious egg.  Oh, well. 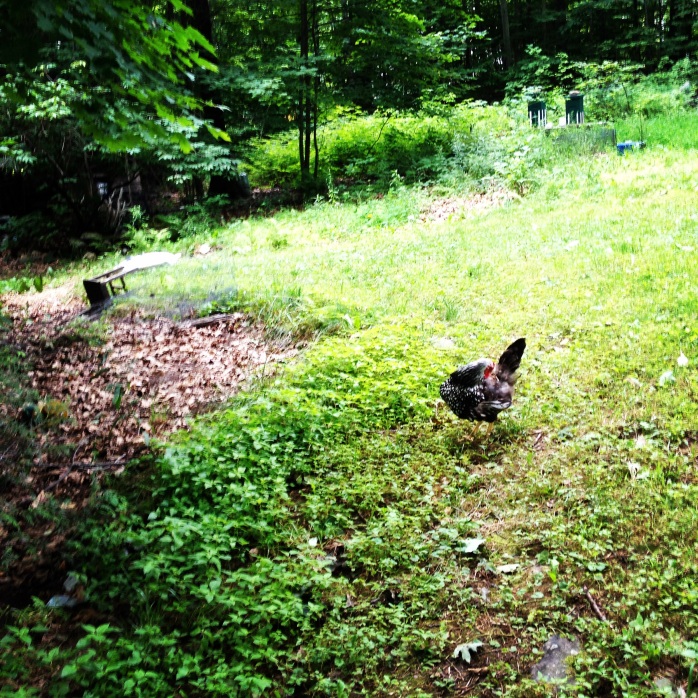 I’m sure that is not technically correct but hey, it’s homesteading math and I make the rules!

← Letting Go of Giving Everything Up.
“Growing Old Is Mandatory Growing Up Is Optional.” →