(A LONG Over Due) Apiary Update.

Talking with my mom a few days ago she asked how the bees were doing and I realized I had not written about them in a great while.  This does not mean that our hive life has been uneventful only that I have not gotten it together to put anything down.

This summer was one of the worst wasp/hornet/yellow jacket years anyone here can remember.  By mid-July all the stores (I’m not kidding EVERY STORE, from Lowes to the ma and pa hardware stores) had huge chunks of empty shelves where these supplies once lived.

Our yard was no exception.

they can take to robing the bees of honey.  Yellow Jackets have been known to attack a weak hive, destroying killing/ eating everyone and everything.

I know that when I was 12 or so I watched a bee fighting a yellow jacket in my backyard.  This battle lasted about five minutes and ended with the yellow jacket killing the bee, cutting it in half and flying away awkwardly with it’s lower section.

Bumble bees, Yellowjakets, Wasps and Hornets all have a similar life cycle.  Only the queen over winters (if they have a well established colony a few workers will over winter as well) She emerges in the spring, mates and begins the hive or burrow anew.

In the space of a couple months the population of any one colony can go from 1-50 members to 20,000.

We had 4 nests in the immediate yard this year.  Two paper wasp and two yellow jaket.  The wasps make those iconic hanging footballs of stinging death while the yellow jacks live in underground hives, like the bubble bees.

The first wasp nest of the season was a easy one.  They built it above the raised fire pit on the overhanging light 15 feet above it.  For that one the solution was simple.  I just built a huge, hot fire, found a long stick, knocked the sucker right in and RAN!

This partially worked I did destroy a football sized nest with brood BUT most of the workers were out foraging so I didn’t get all them.  Three weeks later we noticed another BIGGER nest in the pines that line the driveway.  At the same time we found the additional bonus of a large yellow jacket burrow at the top of the driveway just inside the forest.

Getting rid of these insects posed a few problems for us.  First of all we didn’t want to use nasty chemicals but after both these nest went through ALL the natural alternatives as well as many flooding attempts- we gave up and went with the nuclear option.

We were very afraid about the effect on the bees from these poisons but since they were on the complete other side of the property we took the risk and both colonies were terminated.

We dealt with yet another yellow jacket den in a similar fashion.  This last one was actually on the other rim of the circle garden, it had to go.

Even after eliminating these sources it STILL seemed every flower in the garden contained a wasp, yellow jacket or bumble bee or all three.

We did see honey bees too but I have a feeling that they tried to stay clear of these sometimes aggressive cousins.

Back to our bees- when we left for my sister’s wedding both hives were filled with capped honey, so I added a super to each with foundation for them to draw out. 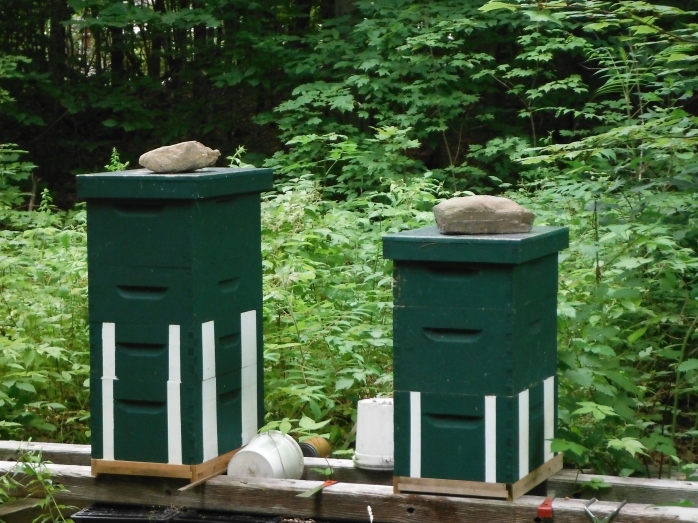 Since there were constantly yellow jackets in the berries and clover around the hives I didn’t want to fully open the hives over the next few inspections.

I did a mite check with my IPM (Interrogated Pest Management) board.

Both hives showed low levels of mites.  The re-queening process interrupts the mite life cycle and so I was expecting this from hive #2 after their earlier queen troubles.  The low mite count in the other hive was exciting.

There was plenty of pollen below the hives during the golden rod bloom.

Looking in just the top boxes it seemed their were drawing the comb out just fine so I let them alone till we could reduce the number of yellow jackets.

After a month and a few aforementioned wasp/yellow jacket battles I fully opened both hives. 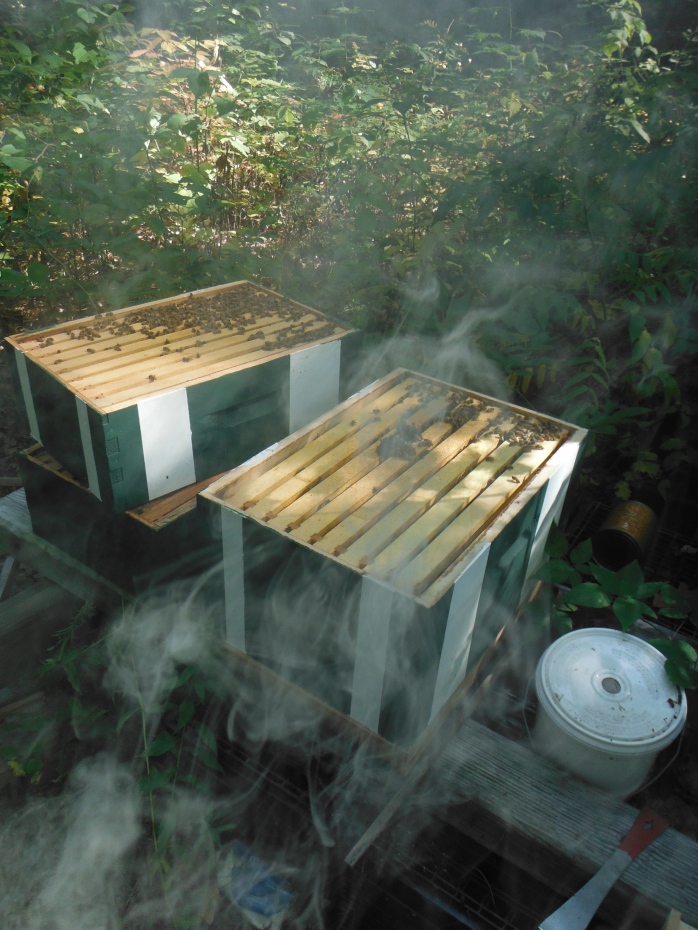 What I found was not at all ideal.  Most or all of the capped honey that had been there mid summer was gone! 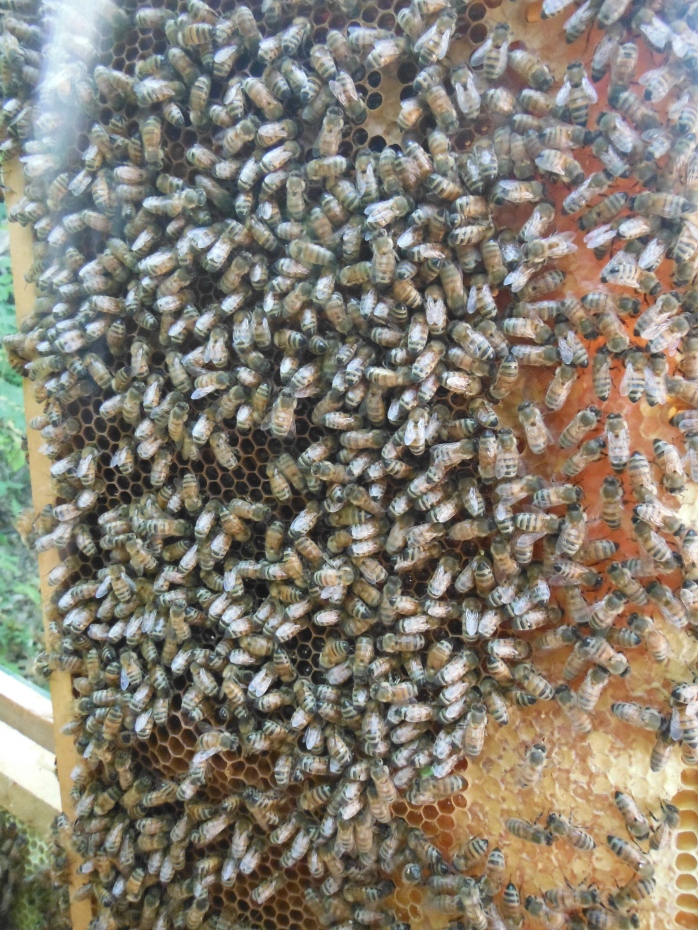 The bees in both hives where highly agitated and not easy to work with.  It can be nerve wracking to open up a calm hive.  Dinking with one that is in no mood for visitors- is quite another thing.

I put in the hops guard, a natural mite killer (you can see them sticking up at the top left and lower right of this picture) did a quick inspection and closed them up quickly.

I was a good to see they had started refilling the cells with nectar but it was hard none the less to see that both hives were ending the season at a loss.

Since the nectar sources in the area are pretty much done for the year this means that I will have to feed them through the winter and there is no way we are even thinking about harvesting any honey.

Such a difference from the hive last year.

I started feeding right away with simple syrup.  I removed the frames from the top boxes (these were draw out comb but totally dry)  and set up feeding buckets in the boxes. 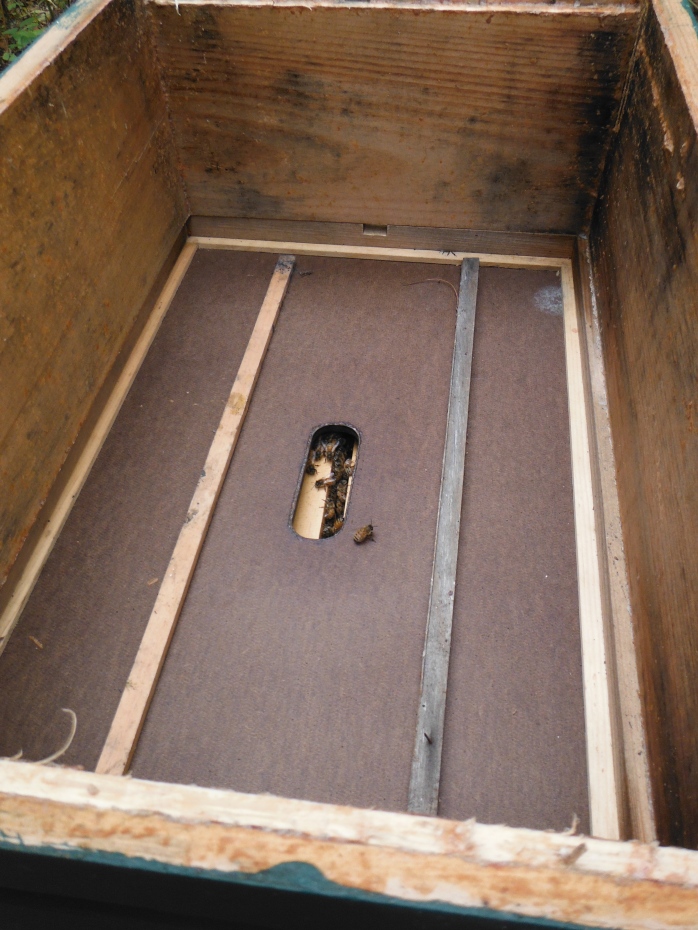 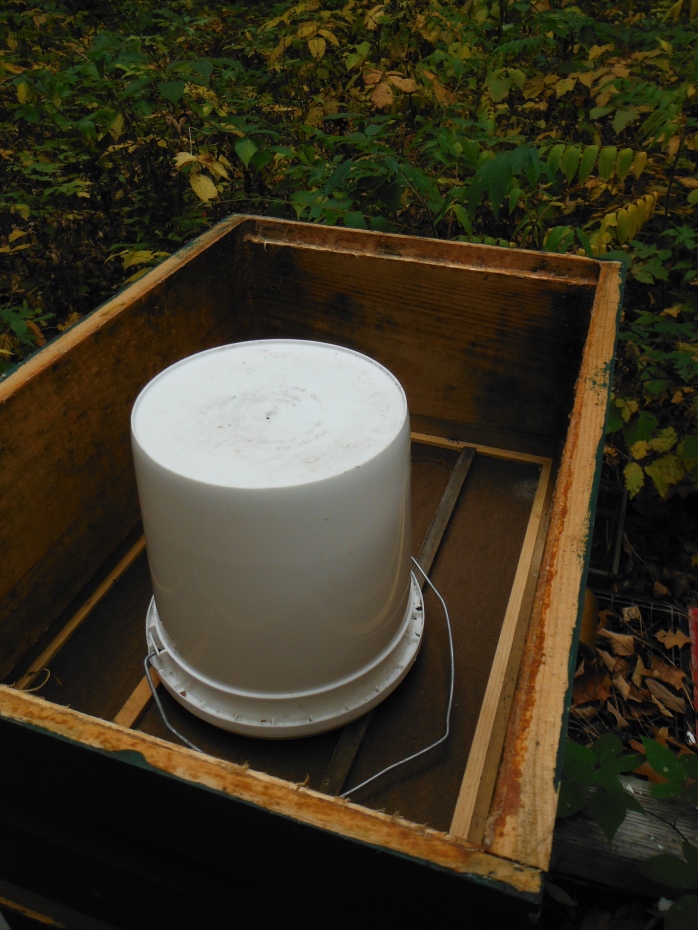 This system allows them to stay in the hive and feed.  It also keeps the other insects from using it as a source of food.

So that is how it stands at the moment.

Basically breaking even.  We will be buttoning them up for the winter in the next couple weeks.  I am happy they are still buzzing and crossing my fingers we have a mild winter.

Last year’s weeks of -20 F were not fun for anyone!

← A Story for Halloween.
Down By The Trading Post. →

3 Comments on “(A LONG Over Due) Apiary Update.”