Well, I went and jinxed it.

After a few posts about how well behaved Isis has been and posting a survival skills article that included “knowing how to dress and butcher an animal.”  I have to admit; I was kind of asking for it.

Like the raptors from Jurassic Park Isis has been systematically testing her fence for weaknesses all winter and last week she found one.  Motivated by the sight of the boys and me in the woods- just out of reach she squeezed though the space between the post and the house and was FREE!

Fifteen minutes later and A LOT of running later we got her back, happy as can be.  The humans were not pleased.

The paternal unit fixed the fence and we got on with life.

A few days later she got out again.  This time she just jumped the fence.  The snow was her accomplice, since its volume rendered a five foot fence less than three feet tall.  That would not have been so bad but I have been leaving the chicken coop door open so they can get some fresh air.

The chickens won’t go on the snow very far, Isis has no such reservations.  She was out for a while before we heard bad chicken noises and rushed outside to find her over by the bees.  She had one hen pinned, scared but alive.  We found two other hens out on top of the coop, a few less feathers but otherwise fine.  This would make a total of five chickens she has traumatized over the last two years.

It feel the need to note that the rooster was NO HELP at all.  He didn’t defend his hens till his last breath.  Instead he was huddled up on the roosting bar with the rest of them pretending not to be there.

He looked at me like “What?! There is a F#CKING MONSTER out there!!!”  I was unimpressed. He seriously has ONE job.

After a more careful yard inspection we found that Isis had progressed from five counts of assault, to murder.   Around the back of the house one of our older hens was laying in the snow, dead.

Her name was Mama.  I named her after she became the broodiest hen in the coop last spring.   It was sad but frankly, inevitable.

We now had two choices; take her into the forest and leave her for the forest creatures or butcher and eat her.  Since she was fresh and the kill was clean I opted for the ‘dinner’ option.

This brings us to the real reason for this post.  A crash course in how to dress a chicken.

Now, I completely understand that most people are uncomfortable with the prospect of butchery, blood and guts.  I have always been just fine with the gooshey bits of life.  As a chef most of my days have been spent wrist deep in all different kinds of animals.  It is part of the job and a big part of what you are paid to do.

All your meat comes from the body of an animal.  This is an inescapable fact.

That being said; I made sure most of the pictures are informative and not like an episode of CSI.

As silly as it might sound; I started by cleaning the kitchen from top to bottom and smudging the house.  Not so much to prevent cross-contamination but as a sign of respect for my little Mama.  We raised her from a chick and it only seems right to create a clean quite place to deal with her mortal remains. 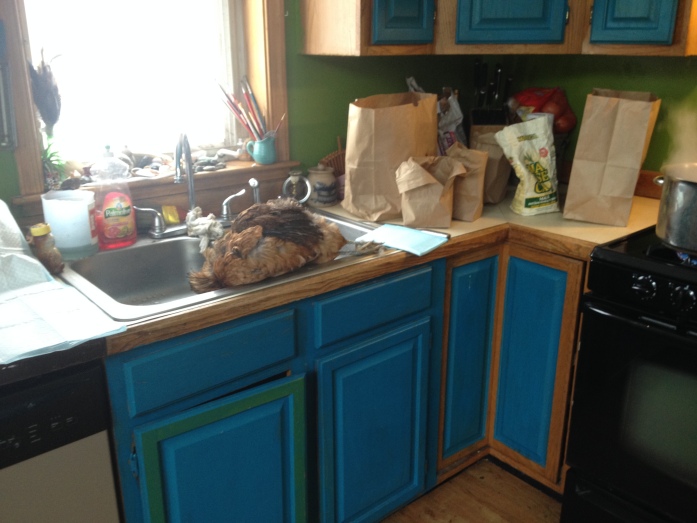 The bags are for various parts, one for clean feathers that I will pluck before I make any cuts, so I know that do not have any chicken insides on them.  We will use them for craft projects for a long time to come.

After some initial plucking I found the fatal wound.  It was not very big so I think that she partly died from shock. 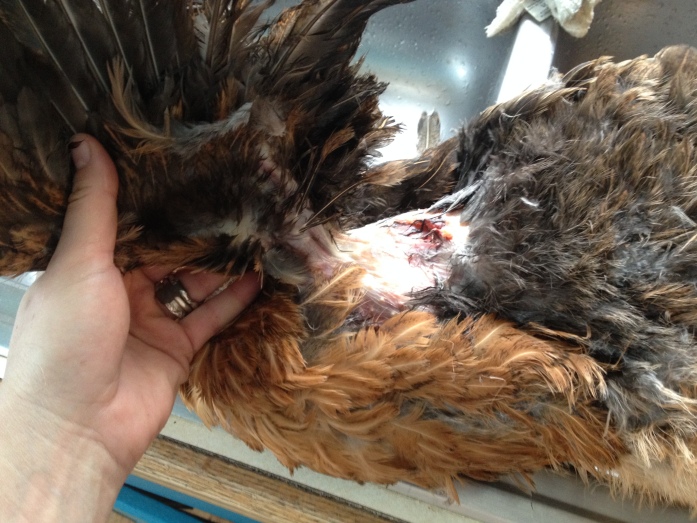 It was the only mark on her.  I hand plucked the most beautiful feathers then proceeded to get to the down to business.  The plucking really is the most tedious part.

The wings I cut off at the elbow and cleaned the meat off the bone.

Then I packed them in cornmeal and salt to preserve the little meat that is left and keeping the beautiful wings intact. 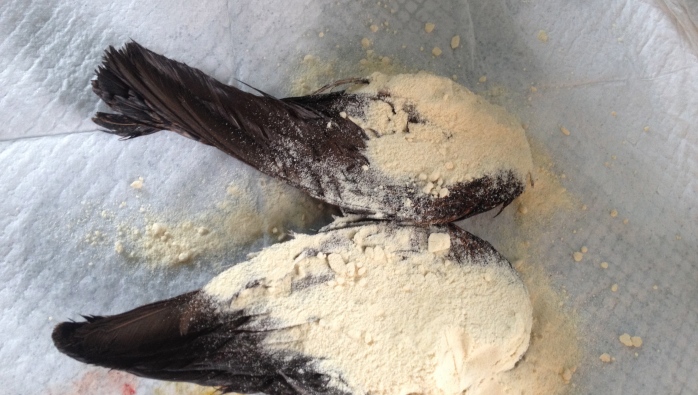 I will use them for smudging (like a the Native Americans did with eagle and hawk wings.)

Back to the feathers:  I utilized the old technique of scalding the chicken in boiling water. It helped a lot with the last bit of fluff and those stubborn tail feathers.

Now she was plucked, and it was time to take the feet off at the ankles.  Any time you are trying to separate a bodily joint the best way is to stretch the appendage and cut through the skin to expose the joint.  From there you see where the bones end and as long as you aim for the tendons and not the bone your life will be a lot easier.

With that done she began to look more like dinner and less like our pet.  This is where things get icky.  Anytime you are opening a body cavity you have to do so carefully.

Pricing the organs (especially any part of the digestive track is NOT recommended and can spoil your meat. 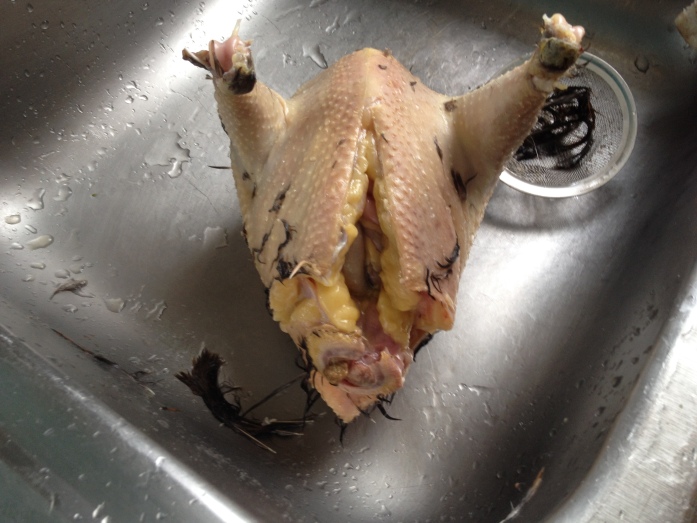 After removing the lower organs I was shocked at the amazing rich yellow fat deposits on her belly. Can you say chicken bacon? 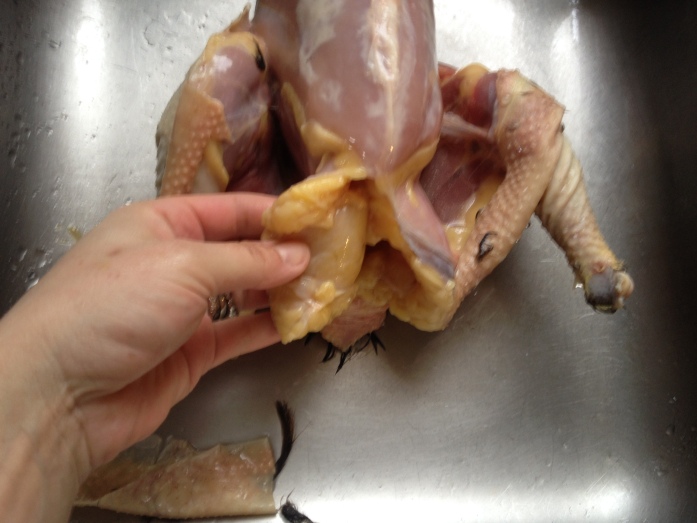 I had a hard time getting the all the little hairs out of the skin; the “filoplumes.”  I could have sat there with tweezers OR singed them off but I was not that motivated.  I opted to remove the skin and fat to render and cook the meat; confit style.

I have personally butchered thousands of pounds of poultry and I have never seen meat so lean and fat so yellow.  It was awe inspiring.  Her innards were all in great shape.  She was a supremely healthy chicken who contracted a fatal case of husky.

In the end I was left with meat for dinner, soup makings for tomorrow and beautiful feathers to decorate eggs for Easter.

One of the most interesting things about dressing a laying hen is to look in the ovaries.  Even if a chicken only lays one egg a day she has five or six in various stages of development, they were like little glowing stones. 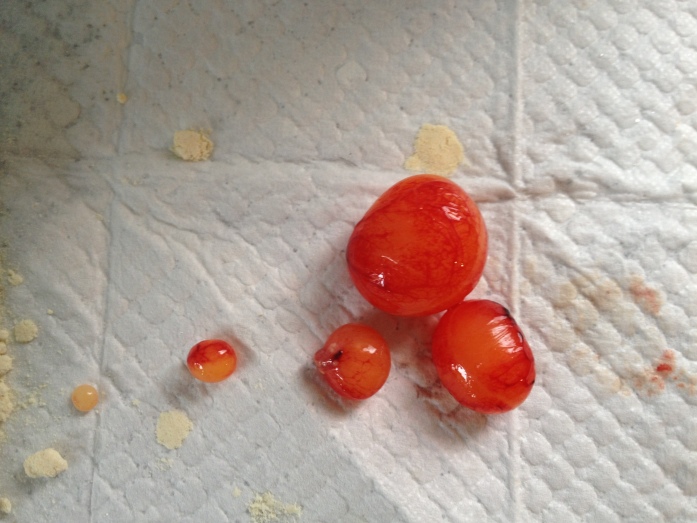 Again, I am aware that many people will find this repulsive or even morbid.  If you can get passed the initial gross factor, there is so much beauty in natural bodily systems.  I feel one of the travesties of this modern age is that we have become so removed from the natural systems that support our basic needs.  We are so out of touch that their raw form appears alien.

I am grateful to have raised and loved Mama her whole life.  I was deeply saddened at how she died but I am happy to be able to use most of what she left us with.  To feed the family and remember her for a long time to come.