An oldie but a goodie… Almost two years later.  The more things change the more that stay the same.

When a Phoenix dies, do its remains know they will be reborn?

This past few months I have managed to; loose my dad, quit my job, flounder in the beginnings of a new venture, remain almost completely homebound for months and gradually loose my mind in the process.

I have been working on one particular painting for years and I just cannot seem to get it right.

I fear it will remain eternally unfinished.  I have been trying to pick it up again but it seems that as one part gets to a point I can tolerate, others wait glaring at me with impatience for their own completeness.

I admit; I may be reading into this a bit much.  Leave me alone.  It has been a rough winter!

It is a picture (or more accurately- TRYING to be a picture) of a Phoenix rising.  Here are some of its unsuccessful incarnations.

Many times I will leave projects unfinished and wait for a time when their completion seems apt.  I hope that this is the time for the phoenix to rise but I am not going to lie, this one has been frustrating.

Around or after the SIXTH time I painted over the wings I just became so overwhelmed with the task I didn’t know what to do.

I decided to go back to the roots of the myth.

I tend to use Bullfinch’s Mythology as a reference when it come to myths and what I found there was interesting.

Most people (and Harry Potter ) recount the story of the phoenix as one of fiery death and rebirth.  The ancient renditions of the myth tell that the parent phoenix builds a nest of frankansence and cinnamon then dies- and rots.

The decomposing body creating the nursery for the infant phoenix.  It is only when the new bird reaches sufficient strength- that it carries the whole nest and remains to the Temple of the Sun and disposes of it on the flames of the alter.

This seems to me yet another instance of modern humanity sterilizing an old myth, to make everything sparking and clean.  The bird dies and is re-born a mist a shower of cleansing flames.

Birth is not shinny and pretty.  It is gory and primal.  I actually liked this version of the myth better, more honest.

I also realized that the finished painting didn’t need to be perfectly proportioned or executed.  The fact the the head is out of proportion and the feet are still paddles are not capital offenses.

So I let go and just painted.

I added iridescent gold to cover up some of my unfortunate brushstrokes (hypocritical as that is!)

I got the face to a place I don’t want to give up on.

It feels like it could be the end but it might also be a beginning.  It’s hard to tell with Phoenixes 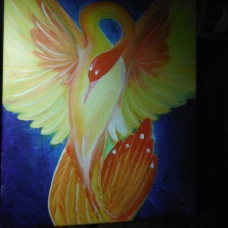 In the beginning the outline was EASY as it so often is. 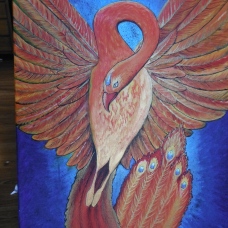 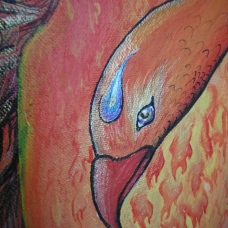 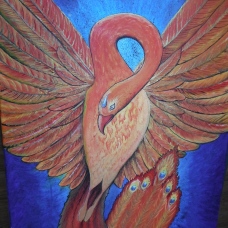