Everywhere I look, there she is. 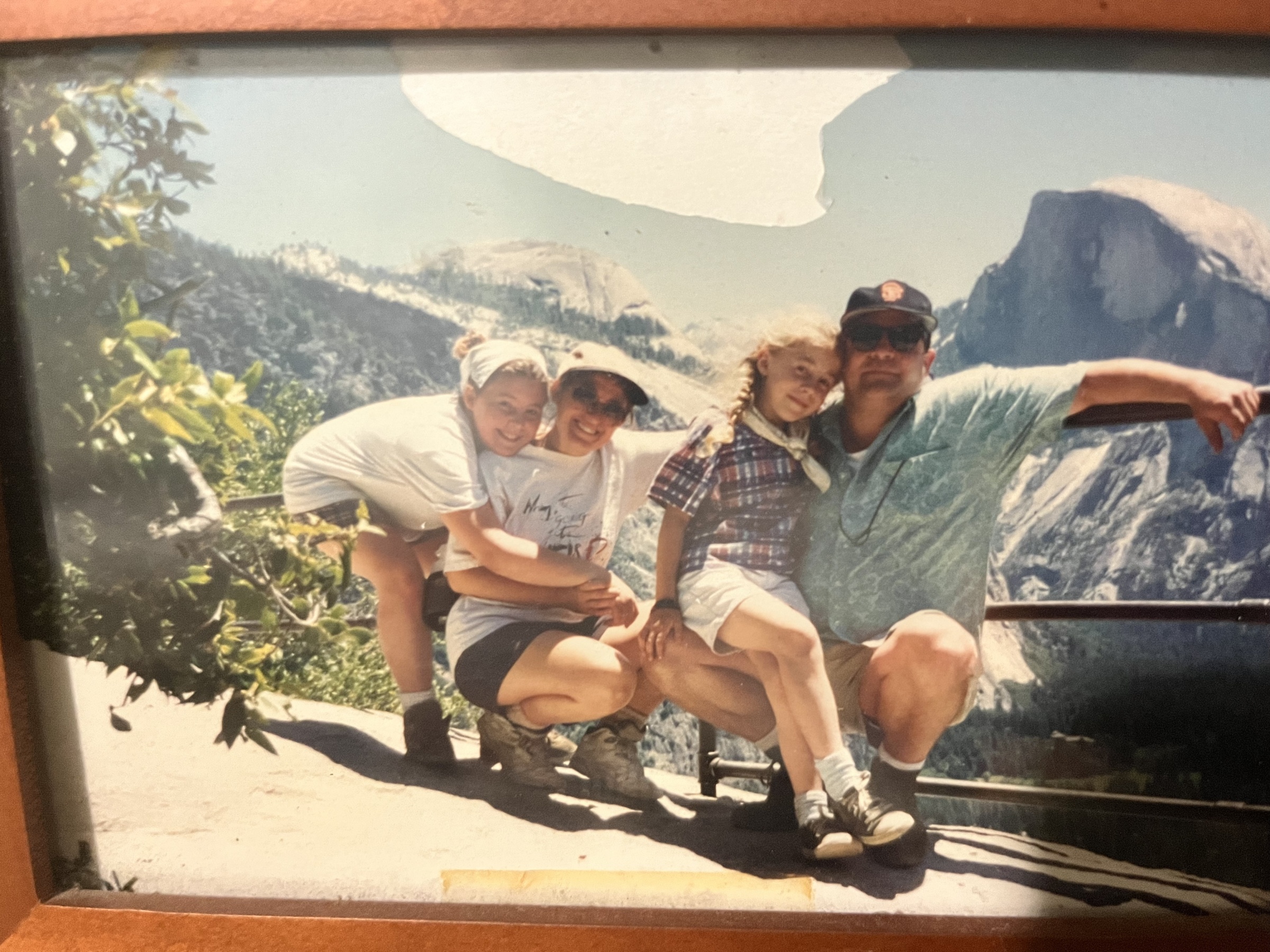 Since she was born, it’s always been this way. During our childhood everywhere I looked in our small house there was a reminder of my sister. As we grew, the physical there-ness of her was inescapable. We shared a bed for many, many years and a room till our teens. We had more belongings that were jointly owned than separate sets of things, and it was joyous. I always had a buddy, a partner and a mate. Even though she was three years younger than me, It wasn’t till she left for college that we stopped cohabitation. For 18 years, I was immersed in her being.

Then came the era of separation that would be the second half of our earthly life together; of her always off in one place or another, and me starting a family and settling down. She was the dandelion wishes and me its rooted dreams. We were different incarnations of the same plant, each doing what they did best. I am better suited to grabbing hold and digging deep, nourishing a single system. She was better at being everywhere else, sowing seeds of connection and new community wherever she alighted. Meeting thousands of other beings and growing with them for a time, before setting off again.

Her physical journeys are now at an end, and her non corporeal existence has begun.

She exists in death, and me in life. My own physical existence, proof of our new wholly opposite nature. Breathing itself is a constant reminder that she breathes no more.

Now, she is the sunshine and the bird song. The rain and the thunder. No matter what, everywhere I look, there she is again. Only now that’s sad, a recurrent and chronic devastation at any stimuli. It won’t always be that way, but for now, this is me. I know from our father’s untimely passing that these things shift. The way I feel today, is not how I will always feel. Some days will be designated for sorrow, and I will bathe in my tears. Other days I will be so full of the joy of her and of life, my feet will feel light on the ground.

Back and forth it will go, for the rest of my years.

This new intangible there-ness cuts like a furrow opening in the earth, the necessary injury for new growth. It is up to me to decide what to plant there. Seeds of sorrow or grief. Bulbs that will make flowers of guilt and remorse. Fertilized by all the shit I “did not do” or “could have done different” these crops would flourish if granted the proper conditions, but what a fucked up garden that would be.

Instead, I will do my best to plant new traditions rooted in the soul of our memories. They will be watered generously with the tears of my grief for many years to come. I hope that they will grow medicine for a world in desperate need of it.

She’s in the bumblebee and the clover. The purr of my cat and the laugh of my daughter. It’s a little like having moved back in with her. Now, I will have to do the living for the both of us. She’s going to be disappointed with the itinerary. (Tough shit Kiddo, shouldn’t have died.) I’m sure there will be trips inspired by her memory, but I will still live as I have, enjoying the company of home and family.

We will go into the woods, and the quiet empty spaces of the world together, because now she is everywhere all at once. I wish things were different, but there is nothing for that. My life has been broken again into a time of ‘before’ and ‘after’. The passing of our father now appears to have been a dress rehearsal. I am still not prepared for this. I want to rail at the sky and earth, at the universe itself- that this is not how it was supposed to be! Given recent events, clearly this was an erroneous assumption on my part.

I feel like a shattered vase. A thing that is supposed to have a specific purpose it can no longer perform. This is so much different than our dad dying, because that was natural in a way. His death was a chip off the rim, a crack down the side; an injury that didn’t affect the function of the item, or the essence of what it was to be me. Rather it showed the mark of life well lived, and well loved.

Here I sit, a broken vase unable to perform the one of the two tasks I was meant to. I can still love her, but not protect her. A vessel that can no longer hold water and space for magnificent things. My family needs me to go through this, to find a new configuration that will once again make room for the beauty of life. A life that didn’t cease to exist when she did. I will become a mosaic of my former self, a thing with a wholly different purpose and ability than before. A similar flatter object. One that is so obviously broken there is no denying the transformative damage, but a thing that persists nonetheless. I can still hold space for the seeds and fruits of my new garden.

Since as long as I can remember, my purpose was to protect and love my sister. I could not protect her from her own sense of immortality, a thing so powerful it often baked off of her. She was determined to prove that though small, she was capable of anything anyone else could do. She was absolutely right, the problem is that everyone has the ability to die and it would seem, so did she. I still have a choice in this; I can be bitter, or I can be better.  I can still marvel at her beauty and wonder of all of creation the way we did as children. I am a broken vase ready for the next incarnation, a thing that will still cradle life and the fruit of this new grief’s garden.

← How do you write the obituary for the one who writes the obituaries?
Shit Sandwich Part Two- The Meat.  →

17 Comments on “Everywhere I look, there she is.”